A Michigan Tech Biological Scoiences student has investigated a possible link between two serious medical conditions, atrial fibrillation and sleep apnea. As a senior, Wennie Paladino worked with a pioneering group of sleep apnea researchers at the Mayo Clinic, in Rochester, Minn.
See the summary of the undergraduate research about Sleep Apnea, Atrial Fibrillation from Michigan Tech Expo 2009

Faculty, Grad Students Design Activities for High School Biology Competition
The 20th Annual Department of Biological Sciences Bioathlon for high school students will be held Wednesday, May 5, on campus. The Bioathlon is the department’s outreach program, which serves to stimulate interest and problem solving in biology among area youth. Sixty students from 15 Upper Peninsula high schools will participate in activities designed by Michigan Tech faculty members and graduate students of the department.

Each team will be comprised of four students, who will not have had formal course work in biology beyond the traditional sophomore-level high school general biology class. All teams will tackle the same four problems:

The Department of Biological Sciences is pleased to announce that the Board of Control has approved: 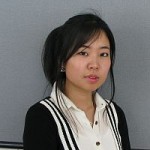 Holistic healers have long touted the benefits of oak leaves as a treatment for gastrointestinal ailments, an anti-inflammatory for insect bites, and more. Now, Michigan Tech student Nari Kang has discovered a potentially groundbreaking new use: natural food preservation.

“This idea has been in my head since high school, after seeing a news story about the chemicals in food,” Kang says. “I wondered–what did people do before there were refrigerators?”

Kang, a second-year bioinformatics major from South Korea, devised the hypothesis for her research after hearing Korean folk culture stories about the preservative qualities of oak leaves.

“Theoretically, there are several reasons why oak leaves would make good food preservatives,” Kang explains. “They contain a chemical component that acts as a natural preservative, they have a drying agent that tends to remove moisture, and they’re large, which means they can be easily wrapped around food.”

The experiment utilized the powder of crushed oak leaves harvested during the peak of summer and sun- or oven-dried. Terpene trilactones–molecules associated with positive health effects, including increased blood circulation to the brain–were extracted from the leaves and combined with various concentrations of purified methanol solution.

Kang then applied the extracts to a fungus often found in many of our kitchens–Penicillium chrysogenum, or common bread mold. After a week in incubation, the results were incredible. Test plates treated with the leaf extract showed drastically reduced rates of mold growth, proving that the extract demonstrates considerable antifungal activity.

“I was very excited,” Kang says. “This really interests me.”

“I never expected to win,” Kang says. “But it felt awesome!” 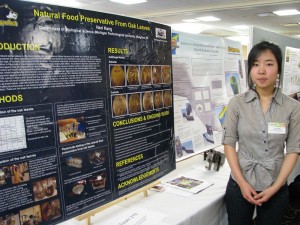 Kang’s future plans include additional research, including testing to make sure the extract isn’t harmful to the body and studying molecular activity to improve antifungal integrity and longevity.

But her first order of business this summer will be to write a proposal for additional funding.

“It can be hard to find the funds for undergraduate student research,” Kang explains.

For now, she considers herself lucky to be able to tackle the research that she’s most interested in. “It’s very exciting to be able to work on projects like this as an undergraduate.”

She singles out Assistant Professor Ramakrishna Wusirika for his guidance and encouragement. “He showed me how to work in the lab.”