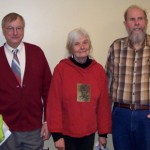 Gratz received his doctorate in zoology from the University of Oklahoma and has maintained an interest in animal and respiratory physiology. His tenure began as assistant professor in 1978, with promotion to associate professor with tenure in 1983. Gratz was the Pre-Health Profession advisor for many years and has taught anatomy and physiology, cardiopulmonary physiology and introduction to pre-medical during his tenure.

Keen received his doctorate in zoology from Michigan State University and has been interested in the fate of animal plankton in Lake Superior. His tenure began as assistant professor in 1977, with promotion to associate professor with tenure in 1981. Keen has been a longstanding member of the University Senate. Over the years, he has taught limnology, perspectives on inquiry, analysis of biological data, biosimulation techniques, zoology and research methods in aquatic ecology.