Tech Today. Michigan Tech’s spring commencement ceremony will be this Saturday, May 2, at 10:30 a.m. in the John MacInnes Student Ice Arena. This year, nearly 1,100 students will be awarded degrees, including almost 300 graduate students.

The guest speaker will be Dr. Susan E. Skochelak, Group Vice President for Medical Education at the American Medical Association (AMA) and director of the AMA’s Center for Transforming Medical Education. She developed and leads the AMA’s Accelerating Change in Medical Education initiative working to promote innovation that better aligns physician training with the changing needs of our health care system.

Skochelak received her bachelor’s and master’s degree in biological sciences from Tech and received her MD degree from the University of Michigan. She obtained a Master’s of Public Health at the University of North Carolina-Chapel Hill, where she trained as a resident physician in family medicine and preventive medicine. She completed a Robert Wood Johnson Clinical Scholars fellowship while at Chapel Hill.

The student speaker will be Kyle Yarusso; the Lake Elmo, MN, native will be completing his BS in Applied Ecology and Environmental Science. After graduation, he will serve as a Centennial Volunteer Ambassador with the Student Conservation Association, a non-profit that inspires lifelong stewardship of the environment. Down the road, Yarusso plans to attend graduate school, studying the human dimensions of environmentalism and conservation.

Doors to the arena open at 8:30 a.m., and students are expected to be present and prepared at 9:45 a.m. A seating chart of the graduates and additional information is available on Michigan Tech’s commencement website. Prior to the ceremony, the official ROTC commissioning ceremony will take place; a public commissioning will also occur during commencement.

The following students in Biological Sciences and Biochemistry and Molecular are recipients of Summer Undergraduate Research Fellowship Recipients (SURF) Awards for 2015:

Additional University recipients can be found at: http://www.mtu.edu/research/archives/awards/surf/

This is the description of the award from the University web site:

SURFs are open to all Tech undergraduates who have at least one semester remaining after the summer.

Annual awards of up to $4,000 are available. Program requests for applications are announced in TechToday beginning in November, with applications for these annual awards due January 30, 2015.

Fellowship recipients will conduct a research project under the guidance of a Michigan Tech faculty mentor, during the summer semester.

Fellowship recipients are required to: 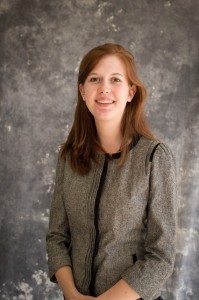 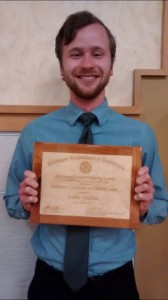 Outstanding students, staff and a special alumna were honored Friday at Michigan Tech’s 21st Annual Student Leadership Awards Ceremony. The event’s keynote speaker was also the winner of, perhaps, the most prestigious award presented. Brtta Jost, ’02, ’04 received the 2015 Outstanding Young Alumna Award. Jost is senior engineer in large structures design engineering for Caterpillar. In her remarks, Jost recalled the changes that have occurred since her days as a student, most of them in technology and social media.

“Back then, if a speaker looked out and saw the audience looking down, she would have thought they were bored or disinterested,” she said. “Now I know you’re posting my remarks on Twitter.”

Jost said the most important aspects of a Michigan Tech education have not changed since her time here a decade and half ago.

Perhaps the most prestigious undergraduate award, the Presidents Award for Leadership, was presented to Kim D’Augustino, a double major in Materials Science and Engineering and Biomedical Engineering. President Glenn Mroz cited D’Augustino’s numerous accomplishments including serving as vice president of the biomedical engineering society, mentoring students through the Wahtera Center and the ExSEL program and acting as event coordinator at the recent, highly-successful, campus Relay For Life.

Dallas Linville, was the recipient of the Vice President for Student Affairs and Advancement Award for Service, Nate Peterson received the Exceptional Leadership in Student Governance Award, the Exceptional Enthusiasm as Student Leader Award was presented to Luke Dalton and the Student Employee of the Year was awarded to Taylor Driscoll.

The Rising Star of the Year, presented to a first or second year student showing great potential for leadership, was awarded to Keagan Fortier. Britta Anderson was named Outstanding Future Alumnus or Alumna. The award is presented to a student already living the Alumni Association’s motto of “Celebrating Traditions, Creating Connections.”

Other awards handed out included:

This year’s Departmental Scholar in Biological Sciences was Evan Bachman

Congratulations to Drs. Stephanie Ogren and Casey Huckins on publication of their paper:

Dr. Durocher recruiting for a study on the effect of diet or exercise on obesity

Dr. Durocher is recruiting participants for a  study titled:

The effect of diet or exercise on visceral obesity, neural cardiovascular reactivity and arterial stiffness in obese humans.

If you are interested in participating (there is monetary compensation) and meet the requirements listed in the attached flyer please contact Dr. Durocher.

A publication based on research in Dr. Ramakrishna Wusirika’s laboratory. 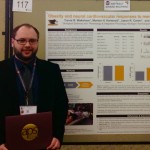 Travis Wakeham, an undergraduate researcher in Dr. John Durocher’s Clinical and Applied Human Physiology Laboratory, received a prestigious David S. Bruce Excellence in Undergraduate Research Award at the Experimental Biology Conference in Boston, MA last week. Prior to the conference Travis had already received a David Bruce Outstanding Undergraduate Abstract Award which included $100 and a 2-year complimentary membership to The American Physiological Society. Travis will receive an additional $400 and a certificate for the Excellence in Undergraduate Research Award. This award was based on the quality of his poster and his oral presentation to the David Bruce Award Selection Committee. The title of Travis’ poster was “Obesity and neural cardiovascular responses to mental stress in humans.” Travis was mentored by both Dr. John Durocher of Biological Sciences and Dr. Jason Carter of Kinesiology & Integrative Physiology during this research project.

Marquette High School, one of many high schools visiting this year 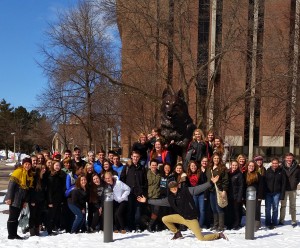 45 Marquette Senior High School students received the opportunity to travel to Michigan Tech University last Friday, March 27th. During their visit, students learned about the many new careers in life sciences and listened to professors discuss the ground breaking research that they are conducting in genetic research. Students were also allowed to visit an anatomy and physiology lecture and do labs in the life sciences with MTU students! Part of the day was devoted to helping the high school students understand the many different careers there are in the emerging fields of life science studies.