“I am extremely excited to have Maria on staff,” said Cameron. “Since she came to Michigan Tech in 2007, she has continuously shown an insurmountable passion for this school and this team. Her competitive nature, energy and her basketball mind will be huge assets to our team’s ultimate goal.”

Kasza was on the Tech squad for three years, competing only one season due to injury and transfer rules. She was an integral part in two of the team’s NCAA Division II Elite Eight Appearances.

“I am so excited for the opportunity to be back with Michigan Tech basketball, and I can’t wait to get up to Houghton and start working with Kim and the Huskies,” said Kasza. “I believe in everything that this program is, and I’m thrilled to be a part of continuing Tech’s tradition.”

She received both her bachelor’s and master’s degrees in business administration from Michigan Tech. Kasza was a member of the Dean’s List and Beta Gamma Sigma Honors Fraternity.

In addition to coaching, she spent the past two years working as a project lead for the Michigan Public Health Institute.

Kasza will begin her duties on June 1.

Roger Woods, a lecturer in the School of Business and Economics, received the award in the assistant professor/professor of practice/lecturer category. He also synchronizes his schedule to his students.’

Woods came to Michigan Tech in spring 2003. The former IBM manager and engineer teaches Quantitative Problem Solving and is an instructor in the Business Development Experience, the School’s equivalent of Senior Design. He also has taught a variety of other courses, including project management, operations management and entrepreneurship.

Students polled in his Quantitative Problem Solving class wrote, “He never lets a student fall behind if the student is putting their 100 percent effort into the course”; “He makes a difficult class enjoyable and gives us plenty of opportunities to get help”; and “He is the BEST teacher that I have ever had, period. Of all the schools I have ever been to, he is the most helpful teacher and the most excited about his job. He creates energy so that this class will never be boring and keeps us busy.”

How does he inspire such enthusiasm? “I think it’s access,” Woods said. “I don’t expect them to learn everything from a book or from a lecture. It’s going to take some exploring; when they explore, they sometimes need help, and that doesn’t happen on my schedule.” He also makes a special effort to tailor the material for his students. “It’s important to think of your audience.”

One of the best things about teaching, he said, is watching a student experience the “aha!” moment that may serve them later in their careers. “I want them to walk away with confidence that they can learn, not just regurgitate information,” he said. “Someday they will be in the workplace, without a professor, and I want them to apply these lessons so that ultimately they will do their job better.”

“I challenge them, I make them think,” Woods added. “If they are willing to respond by thinking, then they get it, and that’s rewarding to them. And I enjoy interacting with those students who have that desire to learn.”

Just reading a textbook won’t cut it. “Word gets out: don’t miss class,” he said.

Occasionally, students let him know his efforts have paid off after they leave the University for the corporate world. “I get emails back saying, ‘I did what you told me, and I was a star.'”

“It’s no surprise” that Woods has been honored for his teaching, said Tom Merz, associate dean of the School. “Roger has a great rapport with younger people,” he said. “It’s a cliche, but it’s still true: he deeply cares about younger people, and he gets a lot of gratification watching them work hard and succeed. Plus, he has a sense of his audience, who he is communicating with, so he can reach them.”

His students agree. Wrote one, “When I tell people that I’m in BUS2300, people say ‘Is Woods still teaching that? I loved that guy.'” 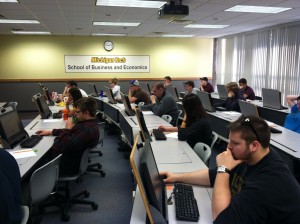 While most students had already left Houghton in the rearview following five days of finals, 22 School of Business and Economics students gathered for yet one more exam. The Bloomberg Aptitude Test (BAT) was developed in collaboration with financial professionals, recruiters, and academics to uncover knowledge and skills relevant for a financial career.

“Bloomberg already provided students with Bloomberg Certification in the use of the Bloomberg terminal.  Now Bloomberg has strengthed its commitment to students achievement through the BAT,” said James and Dolores Trethewey APMP Professor Dean Johnson. “The BAT allows Bloomberg to bring prospective employers together with skilled investment students.”

Over thirty five thousand people around the world have completed this proctored exam, specifically designed for people who are interested in working with investments. The 165-question exam covers topics ranging from financial statement analysis to portfolio management, ethics, and logic in a three-hour period.

Brent Halonen, a 2011-2012 member of the Applied Portfolio Management Program achieved a notable accomplishment by placing among the top 525 (1.5%) test takers. “The BAT is was a good opportunity to show the world what we learned in school in a unbiased environment,” said Brent. “I think my results reflect the strength of APMP and the educational opportunity that it represents.”

Congratulations to Brent and the rest of the test takers.

Klippel Named Dean of School of Business and Economics

Gene Klippel has been named dean of Michigan Tech’s School of Business and Economics. He will take over the position on July 1. Klippel replaces Darrell Radson, who left the University in May.

Klippel knows the campus and community, having served as dean of the School from 1994 to 2003. While at Michigan Tech, he led the School to accreditation by AACSB (Association to Advance Collegiate Schools of Business-International).

“He was consistently the top-ranked candidate in the pool, given his extensive experience at the dean level at a number of universities, his familiarity with AACSB accreditation, and his professionalism,” said Sonia Goltz, professor and chair of the search committee. “We look forward to Dr. Klippel leading the School of Business and Economics as we further advance our programs and scholarship.”

“Dr. Klippel’s strong leadership and communication skills will be vital in achieving the School’s mission,” said Dean Johnson, James and Delores Trethewey Professor in the School. “We look forward to him building relationships with the Michigan Tech community and alumni.”

Before joining Michigan Tech in 1994, he was a member of the faculty in the College of Business Administration at West Virginia University, where he was designated a distinguished professor and holder of the Kmart Chair in Marketing.

Klippel has also served as an independent consultant to numerous Fortune 500 companies, including Drexel Heritage Furniture, Westinghouse and Caterpillar and Caterpillar-Australia.

He received his PhD in Business Administration from Pennsylvania State University and bachelor’s and master’s degrees in marketing from the University of Cincinnati.