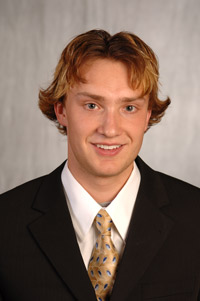 Sophomore goalie and business administration major Michael-Lee Teslak is the first Husky to receive All-WCHA laurels since the 2004-05 campaign when Colin Murphy earned All-WCHA First Team honors, Lars Helminen was selected to the Second Team, and senior Cam Ellsworth was picked to the Third Team.

Teslak, a 6-2, 170-pound goaltender, earned his first All-WCHA award after filing an 11-7-3 overall record, including an 8-2-2 mark in his last 12 contests. He is tied with Jim Warden (1975-75) for first all-time among Husky goaltenders for shutouts in a season after notching his fourth blanking of the campaign last Sunday (March 11) at Colorado College.

The owner of a 1.90 goals against average and a .919 save percentage, Teslak leads the WCHA in goal against average and ranks fourth nationally in the same category. He was named WCHA co-Defensive Player of the Week Feb. 27 and has gained WCHA weekly honors four times in his two-year career.

School of Business and Economics student hired by Department of Defense

The United States Department of Defense will soon have a presence on Tech’s campus and it will look very much like student Robert Frankovich.

Under the new Student Training and Academic Recruitment (STAR) program, Michigan Tech student Robert Frankovich will be hired as a marketing co-op by the Department of Defense. The job includes marketing and promoting DOD career opportunities on campus. Frankovich, 21, plans to graduate from Tech in April of 2007 with a bachelor’s degree in business management.

Michigan Tech and the University of Puerto Rico are the first two universities to participate in the program said Career Center Director Jim Turnquist. Several students applied for the position and interviewed with a DOD representative. “He has the opportunity of a lifetime,” Turnquist said of Frankovich. “I think he’s still in a sense of oblivion.”

Patricia Bradshaw, deputy undersecretary of defense for civilian policy, attended a Wednesday press conference announcing the program and credited the Career Center as being the catalyst behind getting the program going.