Getting Rid of the Bad Stuff

MBA student Cynthia Hodur learned firsthand about getting rid of trans fats, those ubiquitous bad food particles. On a student team in Dana Johnson’s operations and quality management class, she researched and applied her knowledge to a local hospital project and got great results.

“Instead of reading about it, we actually did it in a real-world way that will help the community,” she says of her experience on behalf of Portage Health. The hospital was the first in the Upper Peninsula to go trans-fat free, with help from the Tech students.

Hodur appreciated the opportunity to tackle such a timely problem with her team’s two-pronged approach, especially since she works as a facilities and event coordinator at the Memorial Union.

“First, our research group focused on policy,” she says. “We looked at what had been done globally, with the United Nations, and then we researched further from there: federally, state, and at the organizational level.”

“We were working with the schools then,” she says, “building on an existing program.”

That background information also helped her at Tech, where her second group–applying the information they’d gleaned–looked at recipes and various food products to get rid of the trans fats at Portage Health.

“We looked at everything from cookbooks to working with vendors to vending machines,” she says. “We found substitutes for cooking, like applesauce for oil, and for baking, where a substitute for shortening has been used successfully, for example.”

Along the way, she learned from her teammates.

“There was a variety of people, and we were paired by interests,” she says. “One of the women was a Six Sigma Greenbelt expert on flowcharts!” So, Hodur’s process-chart-producing expertise was accelerated.

And they weren’t all MBAs, said Johnson, an associate professor in the School of Business and Economics. They had graduate students from civil engineering, mechanical engineering and elsewhere. Focusing on the same goal, Johnson said, they would come at it from different angles.

Johnson also stressed the importance of “students working with a real, live project, instead of case studies, which become outdated very quickly.”

The project did indeed take a well-rounded approach to the problem. “The students looked at cost benefits, working with vendors Sysco and Reinhart, even Portage Point (the hospital’s long-term senior housing operation), and its food service customer relations,” she said.

They worked closely with Paul Skinner, director of Portage’s nutritional services, she said. He was important from a management perspective, and he was in charge of recipes.

“We looked at processes and procedures to make sure they are accurate,” Johnson said, noting that they even looked at the definition of “trans fat-free,” which can still include .49 grams of trans fats. Portage Health went below that measure, she said.

“The costs involved in going trans fat-free were not as significant as they thought,” she added.

“We plan on helping them with their seating capacity at Portage Health,” she said. “We’ll be working with them as they expand their capacity. We are also using a green perspective to identify environmentally friendly dinnerware.”

They also plan on looking at the recycling in the hospital to make it more cost effective and efficient, Johnson said.

“We’ll be looking at Styrofoam,” she said, “how it can work within a recycling system.”

This marks the fourth year for the class tackling problems for Portage Health, and she’s also placed three interns into the organization.

Hodur truly enjoys the graduate school experience, including the Portage Health project, and her position at the Memorial Union. She has her sights set on a future marketing position.

“My husband and I moved here because we love the area,” she said. “Working and taking classes at Michigan Tech have been a nice bonus.”

This article was published in Tech Today on February 12, 2010 and written by Dennis Walikainen, senior editor of University Marketing and Communications. 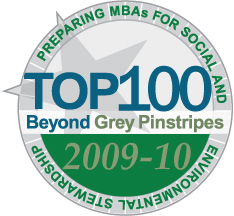 Michigan Technological University’s School of Business and Economics MBA program has demonstrated significant leadership in integrating social, environmental and ethical issues into its MBA program, according to the Aspen Institute’s 2009-2010 edition of Beyond Grey Pinstripes, a biennial survey and alternative ranking of business schools. The school has ranked 58 on a list of the Top 100 business schools.

“Our faculty earned this recognition through their commitment to teaching and research in social, environmental, and ethical stewardship as it relates to business. Our Tech MBA program focuses on conducting sustainable business in a technologically rich, constantly changing world, and our faculty and students rise to that challenge, “ said Darrell Radson, Dean of the School of Business and Economics at Michigan Tech.

While many MBA rankings exist, only one looks beyond reputation and test scores to measure something much more important: how well schools are preparing their students for the environmental, social and ethical complexities of modern-day business.

This year, 149 business schools from 24 countries participated in an 18 month effort to map the landscape of teaching and research on issues pertaining to business and society. Relevant data collected in the survey, as well as the entire “Global 100” list of business schools, is available at: www.BeyondGreyPinstripes.org.

“The best business students move quickly into the front ranks of business–and the attitudes and values they bring to the table are deeply influenced by their time in business education,” said Judith Samuelson, Executive Director of the Aspen Institute’s Business and Society Program. “Will they accept the status quo or act on their passion about the positive role business can play at the intersection of corporate profit and social impact? The schools that are competitive in the Beyond Grey Pinstripes ranking are the real trailblazers–they assure that students have the right skill as well as the will to make things happen.”

“In these challenging economic times, the general public, not just scholars, are questioning whether the established models of business are broken,” said Rich Leimsider, Director of the Aspen Institute’s Center for Business Education. “Beyond Grey Pinstripes schools are thoughtfully pursuing new approaches. They are preparing students who take a more holistic view of business success, one that measures financial results as well as social and environmental impacts.”

Ruth Archer, Director of the Tech MBA program at Michigan Tech added, “Our students are very concerned about a sustainable future. They appreciate receiving a first-class MBA in managing technology and innovation at the same time that they learn how to integrate social value with corporate profitability. This recognition will enable us to attract more like-minded students.”

“Supporting environmental sustainability is a major strategic goal at Michigan Tech. To support this goal and maintain our cutting edge graduate programs, we continue to integrate environmental sustainability management education, including application and tools. This ensures that our MBA grads have the latest management decision making tools upon entering their chosen careers,” stated Dana Johnson, Associate Professor of Operations Management in the School of Business and Economics at Michigan Tech.

School highlights from this Beyond Grey Pinstripes survey cycle are featured in a new guidebook for prospective MBA students, titled The Sustainable MBA, which is already available at Amazon.com and the Aspen Institute’s publication website.

The Aspen Institute Center for Business Education (Aspen CBE) equips business leaders for the 21st century with the vision and knowledge to integrate corporate profitability and social value. We help business educators incorporate issues of social and environmental stewardship into teaching and research by offering targeted resources, networks and a platform to share cutting edge practice among peers.

As part of the Aspen Institute Business and Society Program, Aspen CBE maintains close ties with over 150 MBA programs in 28 countries. Our websites draw over 100,000 visits monthly and our events and networks attract over 1,000 participants each year.

The Aspen Institute mission is twofold: to foster values-based leadership, encouraging individuals to reflect on the ideals and ideas that define a good society, and to provide a neutral and balanced venue for discussing and acting on critical issues.