Top 5 Professor Characteristics in the School of Business and Economics

I have a lot of respect for all of my professors. It is a noble and difficult task to work to share knowledge with sometimes distracted students. 🙂  Personally, I have found that my favorite professors provide an educational experience that I look forward to in every lecture they give. I’ve put together a list of some of the best characteristics that I find when I go to class each day:

1.) Exceptional professors are great communicators of the ideas they’re trying to hammer home. It’s easy to be interested because I’m drawn in by the presentation and class materials.

2.) Every lesson leaves me feeling like I just learned something groundbreaking. Not only do the lessons make me feel like I understand something that matters, I am left wanting more.

3.) Everything we do in class offers me a challenge. I look forward to classes that challenge my business (and especially finance) intuition, my mathematical skills, and my own abilities to communicate my thoughts on these subjects.

4.) I love to see the passion of my professors to teach. It matches my ambition to learn the material. Some professors show a real interest in going above and beyond the call of duty, and I truly appreciate it when they do. When a professor gets involved outside of the classroom, it shows a genuine interest in improving the educational experience of their pupils.

5.) I appreciate confidence in my professors. I know confidence is built over time but I admire the ability to present information confidently and still be approachable if students have questions or didn’t quite understand something the first time.

Jacob Carlson is the student outreach coordinator in the School of Business and Economics. Do you have questions about our School? Connect with Jake on Facebook.

Winter Carnival for the Beginner 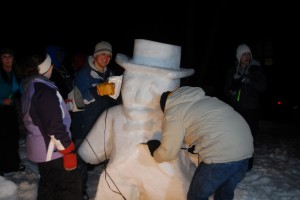 Jacob Carlson is the student outreach coordinator for the School of Business and Economics. Connect with him on Facebook.

Winter Carnival is an exciting time in the life of a Michigan Tech student. With so much to do, it is impossible to fit everything in, so I’m highlighting my favorites:

My Winter Carnival started with Snow Statue building for the School of Business and Economics. A friend and I went out to Dr. Gale’s house to get our forms for packing the snow at three, then I prepared myself for what was my first statue building experience.

As four o’clock rolled around, we immediately began to walk off the area that we were building the statue on, and before long students and professors alike were moving snow with shovels and scoops. We filled garbage can after garbage can with snow to be packed with water constantly running from the hose inside the forms, and soon we had a giant block of frozen snow to begin shaping.

As the hours wore on and the water soaked our gloves and socks, our block began to take shape into Rich Uncle Pennybags. We cut and slushed and ironed the mass, and as we did so, we could hear passersby yell, “It’s the Monopoly Man!”

After a long night of work, I found my pillow and slept through the morning on Thursday. Our hard work paid off, though, and we took fifth place out of all the All-Nighter statues.

On Friday, I played a game of Broomball, which happens to be another long-standing tradition at Michigan Tech. If you don’t know what Broomball is, it is a game played on an ice rink by twelve players (two goalies, ten “skaters”) who run on tennis shoes or boots across the ice to hit a small blue ball into the oppositions net.

Our game didn’t go so well. We passed well and we had some shots on net, but their goalie was a brick wall and they had an all-star shooter that camped out in front of our net and scored every time he could get control of the ball. We lost a shameful 0-10, but it was still a blast and I hope our next game goes better.

The rest of my weekend was filled with some much-needed rest and relaxation, but I’m glad I got to share some of my Winter Carnival experience with you!

Check out one of the month-long statues being built for Winter Carnival here by the Delt Sig fraternity.

My name is Jake Carlson, and I would like to introduce myself to you as the Outreach Assistant at the School of Business and Economics at Michigan Tech.

As my fellow students at the School of Business and Economics may know, life can be a little confusing and you’re going to have questions about life in college. That’s where I come in!

Current students can also feel free to contact me with any questions they might have, and hopefully I can help!

So let me tell you a little bit about myself: