When Alex decided to double major, she committed herself to twice the workload of her peers, and she increased the amount of time it would take to graduate. But why?

For Alex, it also increased her career options.

Many MEEM students at Michigan Tech go into the automotive, manufacturing or medical device industry, but Alex is blazing her own trail. She is using internship and co-op experience to explore both fields and to create a unique future, all her own.

Her first two summer internships were at Lighthouse Productions in Green Bay, Wisconsin in 2016 and 2017,  where she put her Theatre & Entertainment Technology major to the test. She spent those summers working on productions and controlling light boards.

After completing her last internship at Lighthouse Productions and returning to campus, Alex attended Career Fair and landed an engineering co-op at Packaging Corporation of America in Valdosta, Georgia.

“Who knows,” Alex said, “Maybe next summer I will combine the two and work for an entertainment company like TAIT Towers doing engineering work.”

On the surface, mechanical engineering and theater might seem like polar opposites, but there are certainly professions where the pairing makes sense, and Alex is excited about the possibilities.

VPA Student Stories: How Samantha is building her skill set 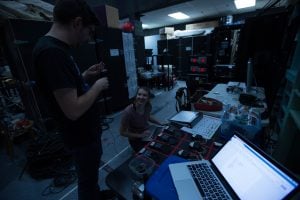 “The sound and theatre departments [at Michigan Tech] do a lot to help students grow and form connections in the professional world,” Samantha Palumbo, senior in sound design.

Taking advantage of her sound design major with a focus in productions, Samantha has worked on eight (and counting!) productions in the past three years at Michigan Tech. She says, “One of the great things about Tech’s undergraduate program is the Visual and Performing Arts Department allows students to work hands-on from the beginning… That’s why I love going to school here. You can have a wide range of jobs on different productions.” Samantha has worked a variety of positions – from hanging lights to being in charge of painting sets. After taking the Scenic Art and Illustration class, Samantha was the Scenic Charge Artist for Picasso at the Lapin Agile. 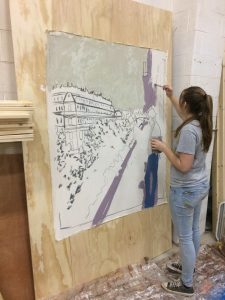 After building her skills at Michigan Tech, Samantha had her first internship at Ohio Light Opera (OLO) as an Assistant Sound Designer. Samantha heard about the position from her professor, Chris Plummer and peer, Charles Southward, who have both worked there in the past. The position was a great opportunity for Samantha to grow, as it’s typically given to more experienced designers. During her time at OLO, she was Sound Engineer and Playback Operator on three out of seven productions. On another three productions, she was Lead Sound Designer. “Working at OLO gave me professional design experiences outside of Michigan Tech, even before I took the official production design class.”

All Michigan Tech students have one thing in common: Tenacity. They know how to work hard and be successful. Among them is Henry Sendek, an Audio Production and Technology student. Adding on to his full class schedule and on-campus events, Henry’s major requires him to attend four conferences throughout his time at Michigan Tech: two as an attendee and two as a presenter. These conferences are incredible networking and learning opportunities. They are the job fairs of Visual and Performing Arts departments around the country.

Henry has attended two conferences so far: the Audio Engineering Society’s Student Summit as an attendee and the Kennedy Center American College Theater Festival (KCACTF) as a presenter. Henry will also be presenting at the United States Institute for Technical Theater (USITT) later this semester and attending the Audio Engineering Society’s 145th Convention next fall. Initially, Henry wasn’t very excited to have to attend four conferences, but after experiencing them, Henry wishes he could attend them all many times. He says, “Attending an engineering focused college in Upper Michigan isn’t a great place to find sound designers, broadway productions, and large touring musical acts. That’s why we take part in these different conferences. It gives us the opportunity to see the work of industry professionals and other students and allows us to showcase our work to them. This is our chance to show off who we are.”

Although Henry has had great experiences off-campus, he says that one of the greatest experiences he’s received was through Michigan Tech: the Experience Tech Fee. He can hop in his car and head to Mont Ripley for a free day of skiing and then walk into the Rozsa or McArdle theater that night to watch a show. Henry says, “I have been able to attend almost every show in either the Rozsa or McArdle since starting at Michigan Tech. The Experience Tech Fee has allowed me to do that at a fraction of the cost.”

Henry is returning to his internship this summer, but can’t give details due to a Non-Disclosure agreement. However, he was hired because of a small group of alumni that currently work for the company. They knew how much knowledge MTU graduates have. They took a chance on Henry and were so impressed with his work that they re-hired him for another summer.

How I Found my Job at the Utah Festival Opera

Aaron Christianson first applied to work at the Musical Theatre of Wichita, but he didn’t have a well-written cover letter. His resume never made it to the boss.

After working with a faculty member at Michigan Tech, Aaron re-wrote his cover letter and sent out eight applications to different companies – within two days he had multiple responses.

He sent out his applications on Friday, had two scheduled interviews on Saturday, and two job offers the following Thursday. Aaron credits this success to his updated cover letter. During his interview with the Utah Festival Opera, Aaron had an immediate connection with the Technical Director, the Upper Peninsula. The director’s son was attending Lake Superior State University, which Michigan Tech had just “proudly destroyed in hockey,” as Aaron put it. Ultimately, Aaron chose to take the position with the Utah Festival Opera.

Aaron’s advice to other students is, “Don’t sell yourself short. Tech is an amazing school that gives students skills most other universities ignore, and that makes us very valuable as employees and leaders.”