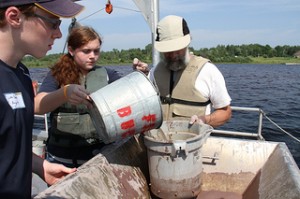 The Albany (N.Y.) Times Union published a story about an educational cruise led by Professor Noel Urban (CEE) to teach plant technicians from the Keweenaw Bay Indian Community Natural Resources Department about the impact on Torch Lake of mining and the stamp sands it left. The story, initially published by the Daily Mining Gazette in Houghton, was picked up by Associated Press wire service and made available to member media outlets all over the country.

The KBIC technicians got a chance to see some of those efforts as well, exploring and doing experiments at the Amheek Stamp Mill, also known as the Tamarack City Stamp Mill, where the Environmental Protection Agency had just finished an asbestos cleanup the day before, as well as the Torch Lake shoreline and the Lake Linden Campground.

“We have them collecting scientific data, like do we have good (plant) ground coverage” in areas above stamp sand beaches that have had remediation,” said Joan Chadde, education program coordinator at Michigan Tech.

Read more at AP and the Daily Mining Gazette, by Dan Roblee.