Three Inducted into Academy of Educators 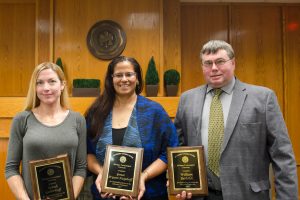 William Bertoldi graduated with a BS in Chemistry in 1980, with Secondary Teacher Certification in Chemistry and Mathematics. Bertoldi spent 30 years teaching in Kingsford Middle and High Schools. In 1996 he established a student organization called “Rockets for Schools,” for which he still serves as advisor. The group designs, builds and launches high-powered rockets. They have performed rocket launches at ceremonies nationally and have been featured in three commercials showcasing student work and have appeared on the Science Channel.

Of his induction into the Academy, Bertoldi says “It was a real honor to receive the award from Michigan Tech. It meant a lot to me and things were so very nice at the dinner. Michigan Tech gave me such a great education and was of such great help to me throughout my career.”

Sarah Gerborkoff, a science teacher at Houghton Middle School, earned a BS in Geology in 2000 with Secondary Teacher Certification in Earth Science and Science.

Since 2013 she has served at Houghton Middle School as the Lead Teacher for the Lake Superior Stewardship Initiative Project. On three different occasions, she served as the advisor for the Lexus Scholastic Eco Challenge team. Her 2014 team that focused on invasive species and her 2015 team that studies the remediation of stamp sands both won a $10,000 national prize.

Yoneé Bryant-Kuiphoff began her career as a science teacher at Milwood Magnet School in Kalamazo in 1993. She eventually became lead science teacher and assisted with staffing and curriculum for the new magnet school. A 1986 graduate of Cornerstone University, she received a master’s in Applied Science Education from Michigan Tech in 2014.

Since 2008 she has served as the Middle School Director for the Michigan Science Teachers Association. From 2011-14, as a member of the first cohort of the Michigan Teacher Excellence Project, Bryant-Kuiphoff participated in the collaboration of Michigan Tech and urban schools to improve Earth Science instructional practices.

Shari Stockero, director of teacher education, in the Department of Cognitive and Learning Sciences says the newest inductees are certainly due the recognition.

“These individuals have represented our program and Michigan Tech well. Teachers do not often receive the recognition they deserve, so we are honored to be able to present them with this acknowledgement of their contributions to K-12 education.”

The Academy of Educators gives public recognition to Michigan Tech alumni and alumnae who have brought distinction to themselves, Michigan Tech and the Teachers Education program through their participation, commitment, outstanding leadership and/or public service in the field of K-12 education.