Cognitive and Motor Aging for Fall 2020

Seminar on current research on age-related changes in cognitive function, motor behavior, and the interaction between cognitive decline and motor performance. Topics include the impact of aging on memory, attention, cognitive control, gait, balance, and motor learning.

MTU Junior, Kayla Conn, was selected by CLS as the 2020 Department Scholar. Kayla is a Psychology major, minoring in Global Community Development. Academically, Kayla strives to excel in her coursework, has strong teamwork skills, and demonstrates a curiosity and depth of understanding that we strive for our students to obtain.

Kayla has participated in two internships thus far. She served as an intern at the Barbara Kettle Gundlach Domestic Violence Shelter in Calumet, where she was trained in answering the domestic violence crisis line, lead child care and group therapy sessions, and ensured clients’ needs were met while residing at the shelter. She is currently an intern at Counseling Services, assisting with event planning and implementation. In addition, Kayla has been offered a paid internship this summer with the Michigan Department of Health and Human Services.

Kayla is also a member of the Women’s Leadership Council (Executive Board member 2019-2020), a Student Ambassador for the College of Sciences and Arts, and a Young Women Leaders Program Mentor.

The research, which students worked on all semester, covered a range of topics from personality to human factors, decision making to well-being.
Great job Huskies!

“The Effect of Mindfulness within Pre-Game Rituals on Self-Reported Confidence and the Acute Effects of Mindfulness on Present State of Well-Being” by Emilie Jacques and Tyrell Buckley.

“The Effects of Priming with Informative Videos on Likelihood to Report Symptoms of Seasonal Affective Disorder“ by Ashley Van Handel, Erin Casey, and Emily Wisz.

“The Effects of Gamer Status and Gender on Impulsivity in Decisions and Thoughts” by Mariah Clement.

“Impact of Self-Esteem on Levels of Regret in Action-Inaction Decision Scenarios” by Brooke C. Poyhonen.

Brooke Poyhonen, who was recently accepted into the ACSHF Accelerated Master’s program, and two classmates won 2nd prize for their coursework poster as part of the World Water Day events held by the GLRC.

“My group and I presented our poster on the potential climate change impacts on the waterborne transmission of Giardia Lamblia.  Giardia is an intestinal parasite that is transmitted through a fecal-oral route, which can be through contaminated water, food, or soil.  Giardia infections are common in children, because they most typically have poor hygiene practices and tend to place many things in their mouths.  The mortality rate for Giardia is relatively small, but if climate change continues at the rate it is now, we will see an increase of Giarda-based infections worldwide, but especially in developing countries where clean water sources are already scarce.  This impact could lead to higher death rates, especially in the elderly and young children. “-Brooke Poyhonen.

Tyrell Buckley, psychology major, was one of 92 recipients of the 15th annual WCHA Scholar-Athlete Award the league announced on February 27. To see the full story, click here.

The Cognitive and Learning Sciences Department in the Harold Meese Center will have adjusted hours over the holiday break:

The Association of Psychology Students hosted a farewell party for Dr. Peter Stacy on December 12. Known for his sweet tooth, students and staff made sure cake, cookies, and hot chocolate were on hand.  Dr. Stacy worked for the Wisconsin Department of Corrections for 30 years prior to joining CLS in 2006. When comparing his 13 years with CLS to his previous career, Dr. Stacy believes his biggest impact has been with the students here at Michigan Tech.

“Dr. Peter Stacy has been one of the most wonderful people I have ever had the privilege to work with. His teaching is amazing; award winning in fact. Our students love him, and he cares very much about our students’ futures. As an adjunct faculty, he worked just as hard as a full-timer! For the past 13 years we have had the honor of working with Peter in his “second career” and will always consider him part of our family.”-Susan Amato-Henderson, Department Chair

Faculty and staff also took the opportunity during the party to recognize the 5 psychology students graduating at the end of the Fall semester.  Graduates were given gift bags with items to commemorate their time here at CLS. Once again, congratulations to the following students: 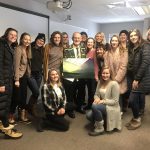 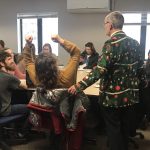 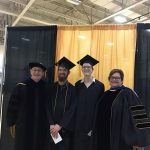 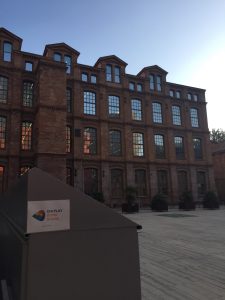 ACSHF faculty, Dr. Elizabeth Veinott, hosted the 2019 CHI Play Doctoral Consortium workshop for the 2nd year.  This time the CHI Play conference was held in Barcelona, Spain from October 22-25. Dr. Veinott enjoyed working with 11 doctoral students from Universities on  four continents.  CHI Play is an interdisciplinary ACM conference for researchers across all areas of play, games, and human-computer interaction. 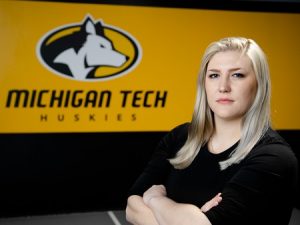 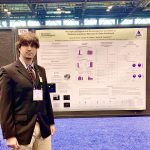 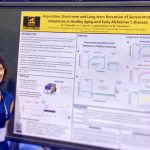