At the end of each academic year, each department nominates one student to represent them as their Departmental Scholar. The Provost’s Award for Scholarship is given to a senior who best represents 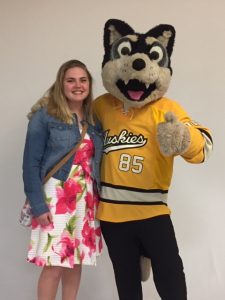 student scholarship at Michigan Tech. This outstanding student is considered excellent not only by academic standards, but also for participation in research scholarship activity, levels of intellectual curiosity, creativity, and communication skills.

This year, the Departmental Scholar award was given to psychology undergraduate student Hannah Kariniemi. Hannah may only be finishing her second year but has already accomplished a lot. She has achieved Junior status with an impressive GPA of 3.64 overall and 3.7 in the Major. Dr. Veinott who has Hannah in the Research Methods II course says “Hannah is motivated and diligent to chase down problems and figure them out”. She is also interning at the 97th Regional Treatment court and doing research with Dr. Amato-Henderson. Dr. Amato-Henderson says she hopes to guide Hannah through writing a manuscript to be submitted for publication. Hannah has also recently been inducted into Psi Chi (the International Honor Society in Psychology) and is also active in the Association for Psychology Students (APS). It is amazing how quickly Hannah is advancing here and she plans to continue in graduate school where she will continue working toward clinical psychology with an emphasis on judicial corrections and community health. Congratulations Hannah! 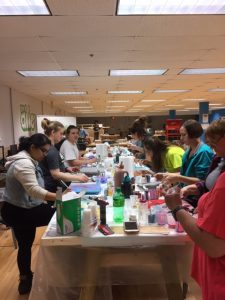 As the semester is winding down, stress is ramping up. The Association for Psychology Students (APS) and the Department of Cognitive and Learning Sciences hosted an “art therapy” session in the Makerspace on Monday, April 22. Everyone had a great time getting to know each other, creating art, and making a mess. It was the perfect way to de-stress before finals.

We are happy to announce that Tom successfully defended his Master’s Thesis titled “Attitudes About Acceptable Risk in the Context of the Biodiversity Crisis” on April 12th. Crafting and enforcing conservation policy requires making normative judgements about what levels of risk are acceptable. These judgements include crucial decisions that impact which species qualify as “endangered.” If a government’s policies are going to represent the values of the public they govern, then public attitudes should be understood. Unfortunately, essentially nothing is known about public attitudes as they pertain to acceptable risk and the biodiversity crisis.

Read more about Tom’s research below.

My research aims to address this gap using data from an internet-based survey (n=1050). I focused on the Endangered Species Act of 1973 which defines an endangered species as “any species which is in danger of extinction throughout all or a significant portion of its range.” Because a species’ risk of extinction increases with decreasing geographic range, the phrase “significant portion of its range” requires a judgement about what level of risk is acceptable. I then examined how the public’s attitudes regarding risk differs both from the guidance provided by conservationists and the practices of government agencies. I also explored the extent to which variation in attitudes could be explained by relevant knowledge, social identity, level of education, personality, moral foundations, and numeracy. I then used structural equation modeling to model the relationships between predictors.

The Department of Cognitive and Learning Sciences would like to congratulate PhD student Lavanya Rajesh Kumar for her acceptance into Yale University’s Innovation to Impact Program! 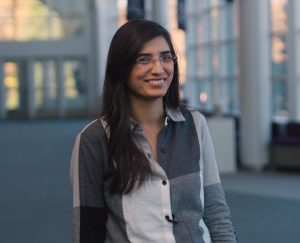 Lavanya was selected for the prestigious program that is focused on entrepreneurship training in substance abuse research. Innovation to Impact at Yale was developed as a national program to provide education, mentorship, and seed funding to innovators. The program is open to scholars interested in both exploring what it takes to bring a product to market and applying creative solutions to combat substance abuse through the use of pharmaceuticals, diagnostics, biomedical devices, app development, behavioral interventions, and public policy. The goal of the program is to help participants translate innovations from the lab to the real world.
Lavanya is currently attending the week long training program to work on her idea to develop an addiction prevention based product.
Click here to learn more about the Innovation to Impact program.
Continue Reading →

Department of Cognitive and Learning Sciences Student Catherine (Kay) Tislar was honored at the 11th annual Graduate Research Colloquium put on by the Graduate Student Government. Kay was awarded the Outstanding Graduate Teaching Award for excellence in supporting graduate education.

The Graduate Research Colloquium offers graduate students from all departments an opportunity to present their research as well as to receive recognition for their accomplishments. 85 students representing 17 different academic schools participated in this year’s event.

Congratulations to Kay and the rest of the 2019 graduate student award recipients for their outstanding accomplishments.

A full list of those honored at the research colloquium can be found here. 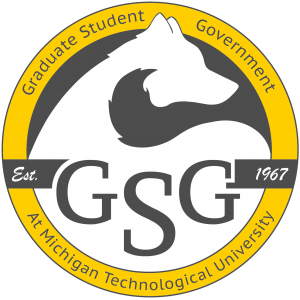 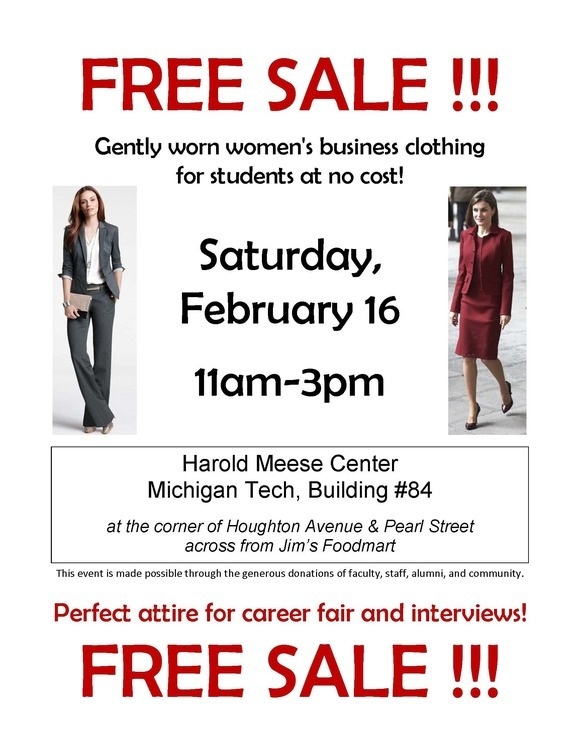 Please join us at the Harold Meese Center on Saturday, February 16th to find your perfect career fair outfit! Select from a large variety of styles and sizes of gently used business clothing and accessories, perfect for career fair or interviews. Did we mention that you get to take home your outfit for free?

This event is made possible by donations from MTU faculty and staff, alumni, and the local community. 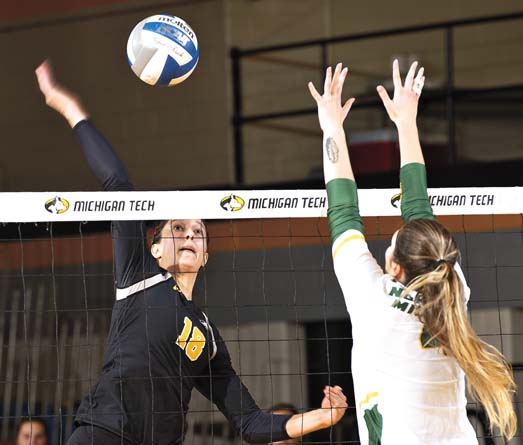 The Department of Cognitive and Learning Sciences would like to congratulate Psychology student athlete Mariah Sherman on a successful career with Michigan Tech’s Division II Women’s Volleyball Team. Sherman wrapped up her final regular season home game as a Husky with a 22 kill win over rivals Northern Michigan University. As the lone senior on the Team, Sherman was honored before the game for her accomplishments over her last 4 years as a Husky including: 1000 career kills, GLIAC Academic All-Excellence Team, and GLIAC North Player of the week. The department wishes Mariah and the rest of the volleyball team the best of luck on their playoff season.

Read about her GLIAC honors here. 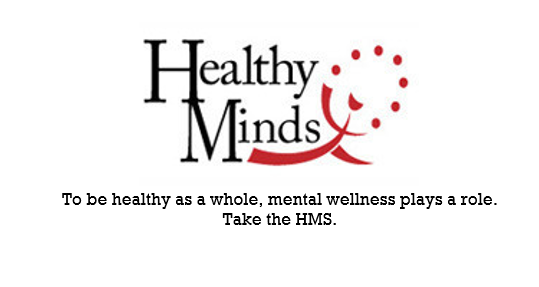 The Healthy Minds Survey (HMS) is a campus-wide, nationally recognized, online survey about student mental health and well being. Since its national launch in 2007, HMS has been fielded at over 180 colleges and universities, with over 200,000 survey respondents.  Getting this information from students across the country will help the Healthy Minds Network get a clearer picture of how students handle the stresses of college life and how well their mental and emotional health needs are being met. More importantly, Michigan Tech will gain valuable information that will help the university make informed decisions about the mental health services and outreach programs available to students.

Take approximately 25 minutes out of your day to give the university your feedback on mental health and wellness on campus. 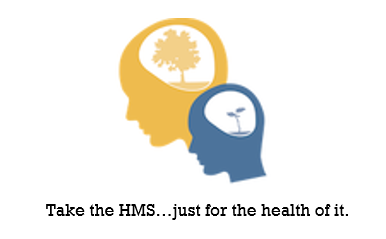 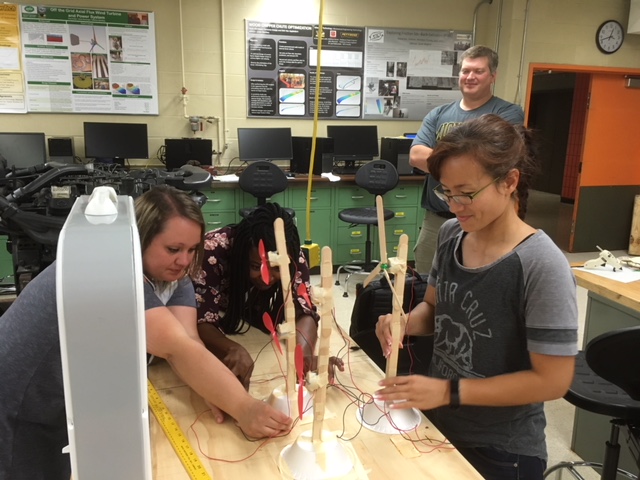 Through the generous support of a grant from the Robert Noyce Teacher Scholarship Program, 8 Michigan teachers participated in a two-week long summer institute on the campus of Michigan Tech last month. The teachers are newly admitted students in the Master’s of Applied Science Education program, housed in the Department of Cognitive and Learning Sciences. The teachers engaged in hands-on experiments in the course, The Engineering Process, which was taught by Dr. Irwin from the School of Technology. Teachers took part in both the technical and creative sides of the problem solving process surrounding engineering.
Continue Reading →

APS is the leading international organization dedicated to advancing scientific psychology across disciplinary and geographic borders. The 30th Association for Psychological Science (APS) Conference brought together more than 4,000 scientists from disciplines spanning the full spectrum of psychological science, some of whom hailed from our own Michigan Technological University. Attendees gained insights into research and trends from world-renowned psychological scientists, improved their skills, deepened their knowledge, and forged life-long collaborations with colleagues. 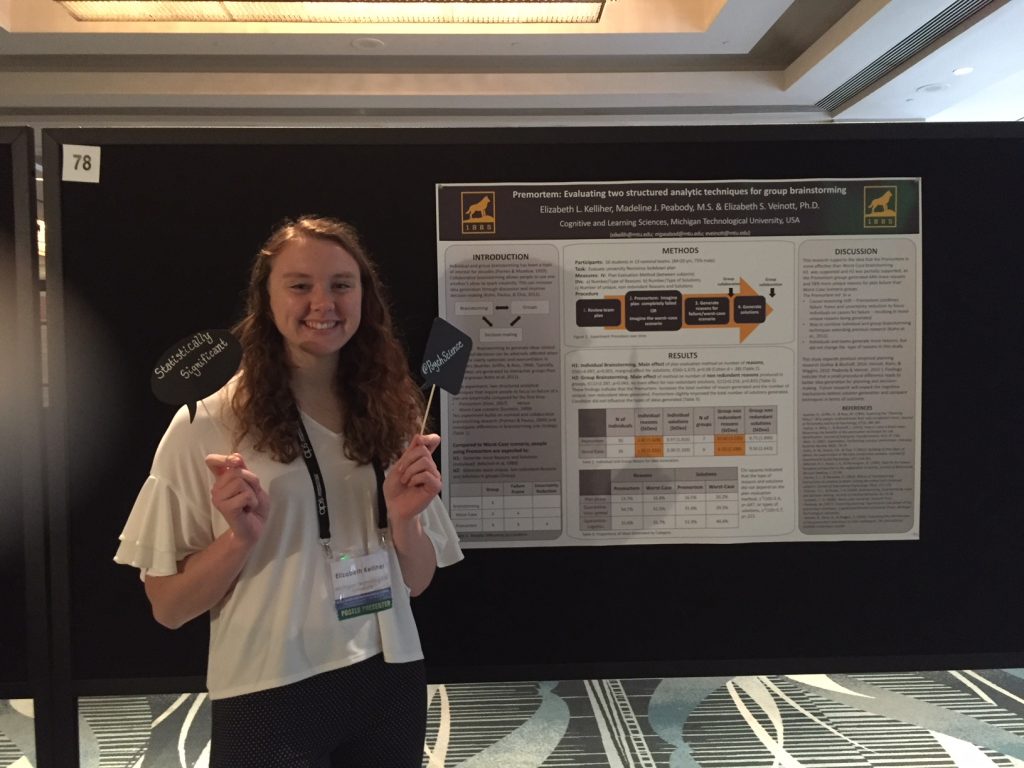