Building connections to and with India 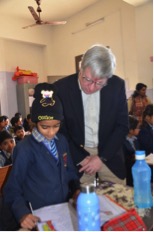 I’ve recently returned from a trip to India – my 6th in the past eight years.  The purpose of the trips has been to develop connections between faculty and universities there and at Michigan Tech.

The primary connections so far have centered on computer science – a natural area of common interest given the strong information technology foundation there – and also physics.  The latter orientation grows from the fact that Ravi Pandey, chair of Tech’s physics department, is from India and has worked hard to facilitate my visits.

This time I attended a conference on the Interface of Physical, Chemical and Biological; Sciences at Dr. Harisingh Gour Vishwavidyalaya (University) in Sagar (Ravi’s hometown), and then visited the Noble College in Sagar, AISECT University in Bhopal, IIT Bombay in Mumbai, and the National Institute of Technology in Calicut (NITC).

At each place, I was warmly received, as has been true during each stop in my earlier visits.  Normally I deliver a seminar on a topic appropriate to the university; typically I have talked about the societal implications of nanoscale science and engineering. This subject matches the world-wide interest in nanotechnology, but often the audience hears for the first time the perspective of a historian of technology on this topic. The resulting discussions have been useful and interesting – and provide a springboard to examine ways in which Tech’s faculty and research activities might align with faculty and students at the universities in India. There are many other areas where the research interests of faculty in India and the U.S overlap, and developing collaborative arrangements built from that common int

erest are the primary target of these visits. This trip, Michigan Tech and NITC signed an agreement to strengthen shared research programs in atmospheric science and applied physics. Similar linkages seem very likely to emerge from the visits to AISECT and IIT Bombay as well.

Also on this trip I had two opportunities to address middle and high school students.  The Noble Public School in Deori (Sagar District in Madhya Pradesh) serves a rural community that until five years before had no school.  Most of the 1,000 students currently enrolled come from families in which no other person had ever attended school. As I walked through a number of classes, I found students who were amazingly confident, clearly hard-working, and possessing strong English language skills (they begin English in the first grade). The dedicated teachers (45 of them) wer 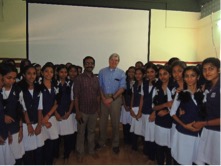 e so proud of the students — as they should have been! The students had prepared a science fair for me, as well as crafts exhibit. And after a short talk from me, they asked questions for an hour about all kinds of topics. It was a wonderful experience, as was the second school visit, this time to the Government Girls High School in Balussery in Kerala State. I met with a group of 10th graders from a gifted and talented program – and they certainly lived up to that billing! Self-assured and confident, these young women asked me about the differences between India and the U.S., about inequality, democracy and technology, and about the differences and similarities between our two countries. I was honored to be the first American to visit them, and urged them to never let anyone suggest they could not do something simply because they were women. Impressive!

Given these two snap shots, I have to think that the future of India will be in good hands!   Students like these are the reason I keep returning to India to build bridges from there to Michigan Tech.