Every January, jazz musicians from the Department of Visual and Performing Arts visit schools around the upper Midwest to carry the word about the importance of music, while at the same time giving many people another important reason to know about  Michigan Tech.  Mike Irish, director of the jazz programs and the key inspiration to the jazz musicians here, has coordinated the January tours for many, many years. This 2017 tour spanned January 3-6 and included concerts at Munising, Newberry, Roscommon, the State Theater in Bay City, Bay City Central and Bay City Western high schools, and Harrison.  Just for good measure, the Jaztec group played an evening gig in a restaurant in Bay City.

The director of bands at Harrison captured the full impact of these visits.  He told me he was “delighted at how excited [Tech’s students] were to perform, being that our show was the last one on their tour and it was awfully early in the morning! What a special group of musicians they all are to perform so amazingly well before 9:00am!  …The entire group stayed for awhile after the performance to talk to our band students, who were so very grateful for the time with them. They answered all of the students’ questions and were very patient with students who have never been enrolled in a music course. Not one performer rushed to pack up their materials. They showed our students so much respect by carving out a great deal of time to educate them.  I have had several students ask about the programs that your school has to offer outside of music clubs since this event…. Please keep these types of programs a possibility for our area high school students! Your school has gained many fans through this wonderful experience that you have generously provided to us.”

For a long time we have known that students are Tech’s best ambassadors, but the jazz players are the best. Their dedication is outstanding, as shown by their schedule on just the first day.  They departed the SDC at 6:30AM, played a concert in Munising at 10:00, another at Newberry that afternoon, and then rode the bus south of the bridge to their overnight stay near Roscommon. It certainly helps to be young and energetic!  And that energy explains why we these tours will continue.  But we should remember that the players gain as much from the visit as their audiences.  So we owe the students and Mike a big thanks for their continued excellence and commitment.  They represent Michigan Tech and the college very well. Well done! 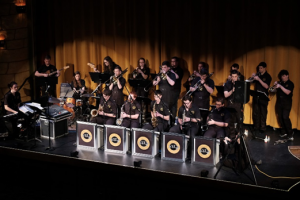 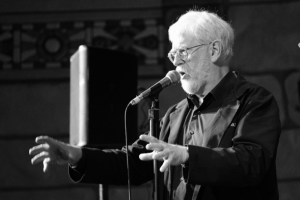 Mike Irish in “full teacher mode” at the State Theater, Bay City. “I love sharing stories about the band, MTU, and the pieces that we are playing!  I guess it shows.” 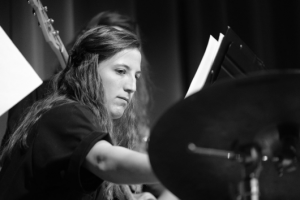 The drummer is Libby Welton, a December 2016 MTU grad in Mechanical Engineering.  She started her first job in Wausau, WI immediately after the tour was over. 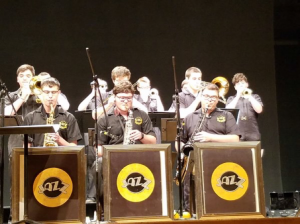 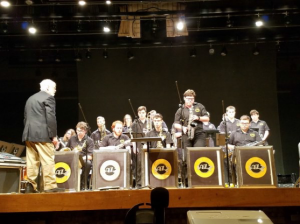