Chemistry in the college

While the College of Sciences and Arts is approaching 50 years, several departments here have a longer history. One is Chemistry, which only came into the college in the late 1990s — before that it was joined to the Chemical Engineering unit. It is now an integral part of the college and an number of good things are happening there.

First, several new faculty who have joined the unit in the past 8 years are making their mark. Xaiohu Xia, who arrived in 2014, recently received the prestigious NSF CAREER Award to advance his studies of bimetallic nanostructures for medical diagnostic purposes. And earlier in the fall Loredana Valenzano, who came here in 2012, attended a workshop in India during which she lectured about modeling and fundamentals of electronic structure theory.  As the chair of physics noted, “she also charmed students in her own Italian way!” 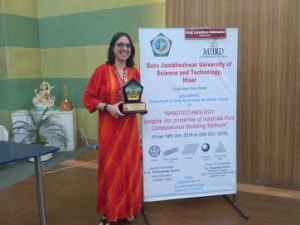 Second, a few days ago word reached me that Cary Chabalowski, chair of chemistry, was recognized as the coauthor on one of 25 most cited papers in the  Journal of Physical Chemistry — “Ab-Initio Calculation of Vibrational Absorption and Circular-Dichroism Spectra Using Density-Functional Force-Fields”  that appeared in 1994, volume, 98 (45), 11623-11627. (See http://axial.acs.org/2016/12/15/physical-chemistry-most-cited/?utm_source=Newsletter&utm_medium=Email0117&utm_campaign=Axial) Cary explained that he was neither the lead nor the corresponding author, but that he  “spent several years doing the foundational research along with my colleague and dear friend, Dr. Philip Stephens (lead author & since deceased), at USC.”  Cary added, “working with Philip gave me some of my most enjoyable years as a scientist.”  Cary’s career in administration took him away from research for many years, but his arrival here 3 years ago was supposed to allow him to get back to it.  He’s been tied up in too many things administrative, but we’ll be trying to find ways to allow him back into research.  This news from the American Chemical Society shows the quality of work that explains why we asked Cary to chair the department. Congratulations, Cary!  He’s working to help other faculty match his record of accomplishment.  The potential is certainly there!