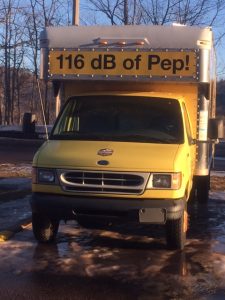 Considering that Michigan Tech offers no degrees in music, the variety of quality musical groups here is quite amazing. Jazz and vocal groups, an orchestra and bands — students can participate in all of these, often in more than one venue. But for the typical student here, the Huskies Pep Band has been the face of Tech’s musical activities. The band enters every sporting on campus playing “Also Sprach Zarathustra” – the theme from “2001 a Space Odyssey.” And the fun only begins there, as the announcers welcome “The Cream of the Keweenaw, The Pride of Pasty Land, The Second-Best Feeling in the World!” The band has grown large enough to maintain three separate units, and every one of them has a good time!

The stories about the DaWGs (Damn, We’re Good!) are legion. I remember when Nebraska-Omaha added their Division 1 hockey team in the 1990s, they engaged Pep Band director Jeff Bell-Hanson as a consultant to tell them how to do it right! Obviously Tech knows how to do it right. How else to explain Northern Michigan’s decisions more than 2 decades ago to NOT allow the Pep Band into the ice arena in Marquette? The Northern Sound Machine simply could not compete! And for several years, the Huskies provided the official pep band for the WCHA Frozen Five hockey finals. Not bad for a unit that prides itself on volume!

Recently the band’s truck, which moves instruments from Walker to the SDC (or wherever the band is playing), got a facelift. The humor associated with everything the band does (ask Northern Women’s Basketball Coach Troy Mattson how it fells to attract the band’s attention!) is obvious on every panel. I especially like the rear door, which thanks drivers for being “behind” the Pepe Band! 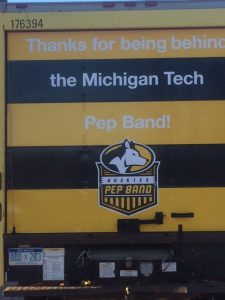 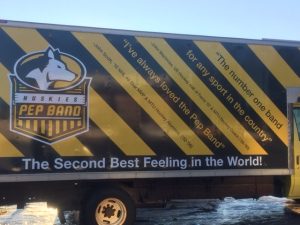 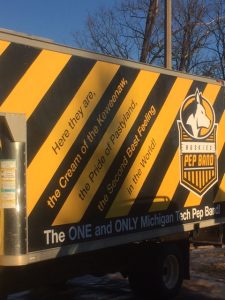 The decorations mark the support of alumni and friends of the band, who have long provided gifts large and small. But funds from friends and alums also support the acquisition of the instruments provided to students, notably percussion, tubas and other large bass instruments. Instrument repair and maintenance, music, and other operating expenses also are assisted through the generosity of those making annual gifts. In this day of declining state support for higher education, the importance of gifts are rarely so obvious. So let me join the band in thanking everyone whose support allows the band to be heard (and now seen!)  from in its own inimitable way!