Notes from the Dean

In recent years, a distinguishing feature of academic research has been its deep interdisciplinarity. This pattern has been growing since World War II, an event that spawned scholarly attention to developments in materials, nuclear power, rockets, jet aviation, computers and the medical field, among others. A good signal of the trend was the emergence of hybrid fields of specialization whose very titles signaled the difference, such as biochemistry, biophysics, geophysics, biostatistics and later biogeochemistry and biogeophysics. Importantly, much of the research in ALL fields was taking place at the boundaries between fields rather than at the core.

One of the more important arenas for the growth of this approach to science and research at Michigan Tech has been in the domain of Atmospheric Sciences. Faculty involved in this research hail from physics, chemistry, environmental engineering, and geological sciences. And the program has just marked its 10th year, during which time the group has become visible and respected among their peers. A key step came in 2010, when the National Science Foundation provided funds to construct the apparatus that allows investigators to create the conditions for atmospheric clouds in the laboratory – a cloud chamber.

This grant of more than $1 million proved pivotal in advancing the research program and reputation of Michigan Tech’s atmospheric scientists. Studies conducted with the unique equipment have since illuminated the nature of rain droplets, the formation of snow particles and crystals, and the the behavior of aerosols in the turbulent upper atmosphere, among other subjects. In short, this is a very successful research group!

That success is affirmed by a recent note that the group’s current director, Raymond Shaw, shared with his colleagues to remind them of this anniversary. He chose to reflect a bit on the origin of the effort.

“When Richard Honrath and I submitted the Atmospheric Sciences program proposal, 7 names were listed as participating faculty, and that has now grown to 12. The program started with two students. We now have 8 alumni at various universities and labs around the US, 8 current students, and 2 or 3 more students starting in the fall.

Many excellent research papers have been written over that time and a sustained level of external funding for atmospheric research is firmly in place (as recognized, for example, by the recent NSF ranking of federal funds by discipline). Michigan Tech is now widely known and respected in the atmospheric sciences community.

We can be happy about what we’ve accomplished, and I’d like to thank administrators and department chairs who allowed a small group of faculty spread across campus start an interdepartmental program – a relatively novel idea at that time – and fostered it over the years with a graduate research assistant line from the grad school, availability of faculty time for teaching courses, hiring efforts, etc.

Thanks to all of you for the way you have contributed to the program over the years.”

Richard Honrath was very much the founding spirit as the initial director of the atmospheric sciences program.

Tragically, he passed away in 2009 in a kayaking accident. But the current cloud chamber lab and the team of atmospheric researchers keep his spirit very much alive.

So happy birthday, cloud chamber!  Keep up the good work!

Most academics expect to move and change universities on occasion, as part of the normal pattern of life.  But some of us – including yours truly – find a place we want to be and stay awhile. On May 9, Michigan Tech recognized those staff and faculty who had 25, 30, 35, and 40 years of service.  Several people from the college were on that list, and I want to recognize them reaching these important milestones.  A university pays attention to teaching and learning and to research — two labor-intensive activities.  In other words, we cannot be successful without the dedicated efforts of the people who lead those efforts in education and knowledge generation. Each of the people on this list make a difference in all they do, and we are most thankful for it.  Even more importantly, the students depend up on them.  To be excellent for a long time is a difficult thing to do, but this group has done exactly that.

Both of the 35-year recipients are pivotal staff for CSA. Andy manages the day-to-day tasks as department coordinator in Physics, while Karen is the heart and sole of administration in the college. But everyone here contributes to making the college work.  I want to congratulate everyone for their contributions and for their efforts – and for making it to 25 or 35 years! Thanks to each and every person!

FYI – for truth in advertising purposes, that’s me in the picture with Karen Salo – as I now have 30 years of service to Michigan Tech. The other picture shows Ravi Pandey and Andy Lappi from Physics. 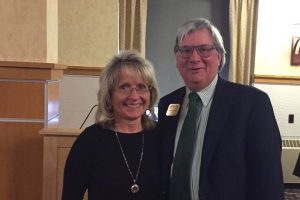 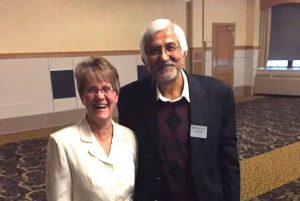