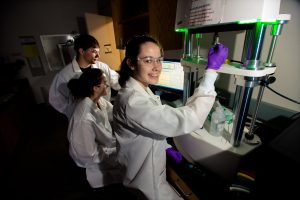 Biomedical engineering is a rapidly growing and evolving field. The need to have a well trained workforce with the ability to integrate life sciences, engineering, and the practices of modern medicine is a pressing issue.

The minor programs will help to prepare students for careers in the medical device or related industry sectors. They may pursue graduate study at the interface of life science and engineering. The minors also help prepare students for professional careers, such as medicine, dentistry, physical therapy, or occupational therapy. 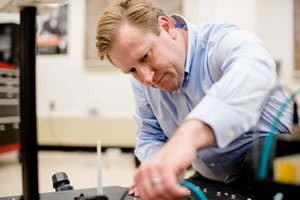 The Vice President for Research Office announced the 2018 Research Excellence Fund (REF) awards and thanked the volunteer review committees, as well as the deans and department chairs, for their time spent on this important internal research award process. The awardees in the College of Engineering are listed below:

Tissue engineered vascular grafts (TEVGs) are beginning to achieve clinical success and hold promise as a source of grafting material when donor grafts are unsuitable or unavailable.

This is a timely and comprehensive review article that references extensive publications. It covers significant technological advances regarding tissue engineered vascular grafts for cardiac disease treatment. The review focuses on the challenge of developing a biocompatible blood-contacting surface.

The research group includes faculty, graduate, and undergraduate students in the department.

HOUGHTON — According to one study, more than 90 percent of U.S. medical expenses are spent on patients with chronic diseases. According the Center for Disease Control and Prevention, $190 billion are spent on cardiovascular disease that in many cases, patients are required to wear a heart monitor day and night. For those patients, heart monitoring will soon become easier, more comfortable, and more convenient, thanks to Michigan Technological University Researcher Ye (Sarah) Sun. 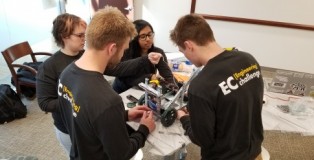 Each team member will receive a $1,000 scholarship and an interview for a Summer 2019 Internship with Stryker Corporation, a medical technology company. Each year Stryker invites engineering student teams to its global headquarters to show off their engineering prowess while competing against rival schools.

Michigan Tech was the only biomedical engineering team in the competition. All other teams were comprised of mechanical and electrical engineering students. Undergraduates Becky Daniels, Melanie Thomas, Emil Johnson and Nicholas Turowski made up the Michigan Tech team.

Thompson adds, “The event organizers at Stryker made a point of highlighting the professionalism displayed by Michigan Tech team. The ability to adapt to changing circumstances and collectively persevere contributed to the team’s success this year.”

The first half of the competition involved picking up small Lego people with the robot and transporting them to the team’s ‘pit stop’. The team was able to deliver a ‘VIP passenger’ to gain extra points, but then their robot arm malfunctioned, sinking them from 1st place to 4th place as a result. The second half of the competition involved an actual race throughout the course. Michigan Tech’s robot had the fastest time.

“It was exciting to see how our ideas came to life, and how prototypes became the actual parts that contributed to our victory,” says Thomas. “It was a constant reminder of why we chose to pursue engineering.”

“The best feelings came whenever a team member was stuck with a particular problem and another team member’s suggestion turned out to be the working solution. During the competition we learned how to work with nearly complete strangers. We adapted once we figured out each other’s strengths,” says Johnson.

“Throughout the challenge we all provided whatever insight we could if we noticed someone struggling with a task, and it was always without judgement,” adds Daniels.

“Every employee at Stryker seemed to love their job,” notes Turowski. “One told about how during his first year at Stryker he was put on a team of ‘vets’ and asked to complete a task that had never before been done. I think that shows how much confidence Stryker has in its employees.”

“You don’t have to know the people you’re working with for a very long time in order to be an effective team. You just need to set your eyes on a collective goal and work to successfully complete it.

Stryker Corporation, active in more than 100 countries, is one of the world’s leading medical technology companies, offering products and services to help improve patient and hospital outcomes.

Twelve students have been awarded the Portage Health Foundation Making a Difference Scholarship. The scholarships are part of a Michigan Tech-Portage Health Foundation partnership established in 2015 to support health education. This year’s recipients have an average GPA of 3.87 and represent the breadth of health-related research happening on Michigan Tech’s campus.

“The merit-based awards reflect the high caliber student talent we have locally, thanks to exceptional teachers, HOSA high school advisers, and Michigan Tech faculty and students who do outreach in the schools,” says Jodi Lehman, director of foundations at Michigan Tech.

At a dinner for finalists, the scholarship recipients had a chance to talk one-on-one with Michigan Tech researchers. Mechanical Engineering-Engineering Mechanics faculty Ye Sarah Sun shared with students how she develops new interfaces for heart monitoring that are reliable and won’t disturb a patient’s life at home, while driving or at work.

Biomedical engineer and health care entrepreneur, Megan Frost, shared  how she is working to improve wound care with a product designed to prevent infection and reduce the need for some post-acute care.

“The Portage Health Foundation has also been very generous in granting need-based scholarships to students enrolling at Michigan Tech, Finlandia University, Gogebic College, Northern Michigan University, and Michigan State University in health-related degree programs,” says Joe Cooper, Director of Financial Aid at Michigan Tech, “These scholarships make a significant financial impact for students in our own local communities.  Thanks to the Portage Health Foundation, students from Baraga, Houghton, Keweenaw, and Ontonagon counties have extra support so they can attend college and focus on health related careers.”

Portage Health Foundation Making a Difference Scholarship applications will open in the fall for incoming high school seniors and transfer students applying to Michigan Tech for fall 2019.  Questions about the scholarship can be directed to Rachel Connors, assistant director of admissions, 7-1880. 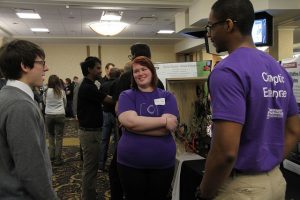 We invite you to register to be a judge at the 2018 Design Expo on Thursday, April 19. The Expo highlights hands-on projects from more than 600 students on Enterprise and Senior Design teams.

Although special expertise is appreciated, judges are not required to be technological specialists or engineers. If you like engaging with students and learning more about the exciting projects they are working on, please consider judging.

If you would like to serve as a judge at this year’s Design Expo, registeras soon as possible to let us know you’re coming. Thank you for your continued support. 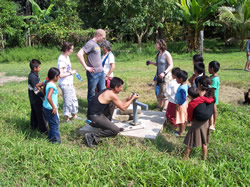 Engineers Without Borders at Michigan Tech will host its annual Band Benefit from 4 to 7 p.m. Sunday (April 8, 2018) in MUB Ballroom A. The Band Benefit raises funds for the organization’s current rural water improvement projects in Guatemala and Panama.

The lineup features Ben and the Bamboozlers, Momentum and the Naddy Daddies with sound provided by WMTU. Enjoy live music, dancing and prize drawings. There will be appetizers and a cash bar.

By Engineers Without Borders. 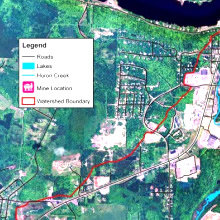 The Summer Undergraduate Research Fellowship (SURF) program will fund 25 students from across the University with funds from the office of the Pavlis Honors College and the Vice President for Research.

This year’s recipients, project titles, and advisors are listed online.

The students that presented this year represented a wide array of scientific and engineering disciplines from across campus and highlighted the diversity of research areas being explored. Judges from a variety of backgrounds and disciplines volunteered their time to evaluate participant posters and presentations. The results were as follows:

The research presented here is sponsored in part by the Office of the Vice President of
Research, the Portage Health Foundation (PHFoundation), the Pavlis Honors College, and the Summer Undergraduate Research Fellowship (SURF) program.

Congratulations to all of our winners and honorable mentions. Thank you to all of the faculty, staff and students that judged and attended the Symposium this year.