Ancient “giant” spearheads and spindles have been discovered deep within New Jersey rock formations by a team of scientists.

These biominerals are actually about four microns long–hundreds would fit on the period at the end of this sentence. But they are much larger than those previously discovered and have huge potential regarding global warming yesterday, today and tomorrow.

These magnetofossils are new to the biomineral world, according to Michigan Tech paleomagnetist Aleksey Smirnov, a member of the research team. They discovered that 55 million years ago, the earth warmed by 6 to 8 degree Celsius after huge amounts of organic carbon entered the atmosphere. Although this ancient global-warming episode–the Paleocene-Eocene Thermal Maximum (PETM)–remains a mystery, it might offer analogies for future environmental impacts of possible global warming.

During the PETM, many land mammals became dwarfed, perhaps in response to starvation from widespread wildfires. Also, nearly one-half of sea-bottom-dwelling microorganisms known as foraminifera became extinct due to competition in warmer waters and an inability to carry the levels of dissolved oxygen for which they were adapted. 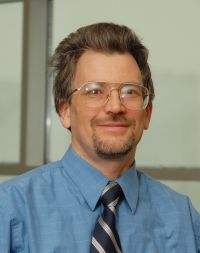 “It was quite a surprise to find that a group of marine microorganisms producing iron oxide crystals inside and outside their cells were not only more abundant during the PETM than before or after, but they grew their magnetic crystals to giant sizes,” says Smirnov, assistant professor of geophysics.

These “giants” were eight times larger than the previous world record for the largest bacterial iron oxide crystal, and the shapes of these giant magnetic crystals were bizarre. “Spearhead” crystals have a six-sided “stalk” at one end, a bulbous middle and a sharp, tapered tip at the other end. Crucially, once reaching a certain size, spearhead crystals grow longer but not wider–a characteristic of most higher biological organisms.

The researchers could not find a similar-shaped organism anywhere in the paleontological annals. They hypothesize it is a single-celled eukaryote that either evolved and became extinct during the PETM or still lives to be discovered today. Shallow ocean water during the PETM seems to have been extremely iron-rich, similar to conditions in only a few places on earth today, such as the mouth of the Amazon River. Future work will include searching for unusual magnetofossils there and elsewhere.

The research results were published in the Proceedings of the National Academy of Sciences of the USA and are the culmination of international research efforts led by Dirk Schumann of McGill University and include researchers from Cal Tech, Princeton and a number of European institutions.