Wayne Pennington, chair of the Department of Geological and Mining Engineering and Sciences, has been named interim dean of the College of Engineering, effective May 13. His appointment is expected to end June 30, 2014, or until the search for the next dean is concluded and the dean appointed.

Pennington has been a professor of geophysical engineering at Michigan Tech since 1994 and became GMES department chair in 2003. Prior to coming to the University, he worked with Marathon Oil and was an assistant professor at University of Texas at Austin.

During his appointment as a Jefferson Science Fellow, he worked in the Office of Infrastructure and Engineering within the Bureau of Economic Growth, Agriculture and Trade. After USAID’s Office of Science and Technology was created in 2010, he shared his appointment in that office.

Pennington received degrees in geophysics and geology from Princeton University (BA), Cornell University (MS) and the University of Wisconsin-Madison (PhD).

“I am pleased to have Wayne serving in this position,” said Provost Max Seel. “He has the strong support of the engineering department chairs to lead the College and move forward with the strategic plan.” 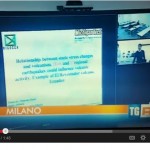 The International Geological Masters in Volcanology and Geotechniques (INVOGE) program was featured on Italian TV news. Links to YouTube videos are provided below. The videos show the MS defense of INVOGE student Daniele Alami, which was conducted via teleconference with Milan on April 12. Daniele’s MS committee consisted of Professor Greg Waite (GMES), Assistant Professor Simon Carn (GMES) and Professor Alessandro Tibaldi from the University of Milan–Bicocca.

This presentation is sponsored by Los Alamos National Laboratory, the Sustainable Futures Institute, Michigan Tech’s Department of Geological and Mining Engineering and Sciences, and Michigan Tech’s Office for Institutional Diversity. 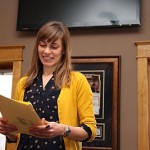 The Department of Geological & Mining Engineering & Sciences
13th Annual Awards Ceremony was held Thursday, April 11, 2013 at the Downtowner Restaurant Hall in Houghton. In addition to graduating seniors and graduate students getting recognition, numerous scholarship awards and special presentations were made by Department Chair Dr. Wayne Pennington.

A selection of photos can be found on the College of Engineering Flickr Resources. 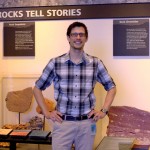 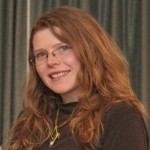 Alex Guth for being selected as Michigan Tech’s representative for the Midwestern Association of Graduate Schools Excellence in Teaching Award. One particular aspect of her teaching innovations that fascinated the selection panel was her work in online education.
Wayne D Pennington said “We are honored to have Alex represent Michigan Tech in this competition!” 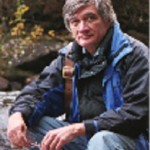 Professor Rodney C. Ewing, Edward H. Kraus Distinguished University Professor
Department of Earth & Environmental Sciences, University of Michigan
‘Lessons from Yucca Mountain Standards, Regulations & Performance Assessments”
Yucca Mountain, Nevada, was scheduled to be a geological repository storage facility for high-level radioactive waste until it was defunded in 2010. This seminar is sponsored by the A. E. Seaman Mineral Museum and hosted by the Department of Geological and Mining Engineering and Sciences. There will be a social after the talk in the Dow sixth-floor atrium (lakeside).
Friday – March 22, 3:00 to 4:00 pm DOW 642; Social to follow in 6th floor atrium, lakeside 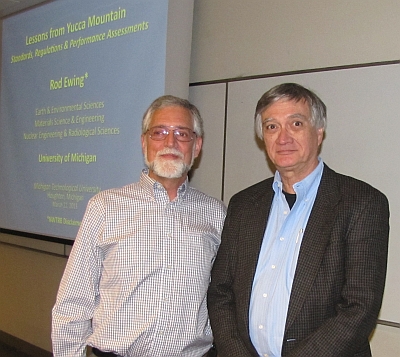 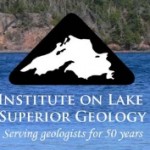 The 59th Annual Meeting of the Institute on Lake Superior Geology will be hosted by the Seaman Mineral Museum at Michigan Tech May 8 to May 11, 2013; Technical Sessions will be at the Franklin Square Inn, downtown Houghton. Registration Information 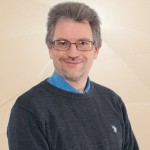 Aleksey Smirnov has been honored with a prestigious National Science Foundation Faculty Early Career Development Award, commonly known as a CAREER Award. The five-year, $470,000 grant will underwrite his research on the ancient history of the Earth’s magnetic field and how it may have affected the planet’s geology and even the evolution of living things.