In addition, at the Awards Banquet that was held on Friday evening February 23, the Graduate School presented several annual awards, including The Outstanding Faculty Mentor Award for 2013 was given to Gregory P. Waite of Geological and Mining Engineering and Sciences. 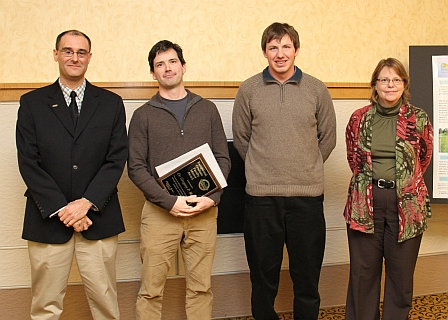 Patty Bryan, Principal Geologist/Senior ProjectManager, URS Corporation – hosted by Association of Environmental and Engineering Geology (AEG) URS Corporation is an engineering, design and construction firm and a US federal government contractor. Bryan will present a technical talk on URS projects and describe opportunities for engineering. Seminar was presented as part of National Engineers Week, Friday February 15, 2013 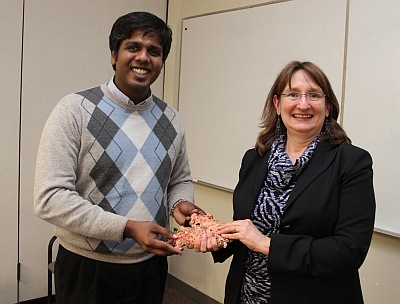 The Geological & Mining Engineering & Sciences at Michigan Tech will have Friday social for the spring semester will be a regular event, on Fridays at 3 pm in DOW 610. The social will be followed by a seminar of the spring seminar series.
Please join us for the social and seminar. Graduate students and faculty, if you are interested in presenting your work, you will have opportunities in subsequent seminars. Please let me know if you are interested for scheduling. External speakers will also be speaking as part of this seminar series, so feel free to invite outside speakers as interest and scheduling permit.
Note: Refreshment will be provided.

See details about the first Seminar
and watch the GMES calendar of events foir future announcements.

Cable shovel is a primary excavation unit in many surface mines around the world. The capacities of the shovels have seen an ever increasing trend to achieve the economies of large scale operation. The modern day shovels have 100+ tons per pass production capacities. The dynamic force of 100+ ton material combined with the dynamic cutting, friction and acceleration forces during the excavation result in severe stress loading of the shovel front end components. Stress and fatigue cracks appear, as a result of this cyclic stress loading, resulting in expansive breakdown, reduced efficiency and production loss. Numerical and analytical techniques can be used to model the stress and fatigue failures.
In this seminar we will discuss the challenges and on-going research in cable-shovel formation-excavation and durability studies. The talk will include: (i) kinematic and dynamic modeling of shovel, (ii) stress and fatigue failure modeling (iii) life expectancy of shovel front-end components.

Muhammad Azeem Raza, an instructor for GMES, will be presenting his work titled “Cable Shovel Durabaility in Formation-Excavation Engineering”. Mr. Raza is a PhD candidate for a degree in Mining Engineering at the Missouri University of Science and Technology, Rolla. He is also an assistant professor at the University of Engineering and Technology, Lahore where he taught for three years before coming to the US for his PhD.

Wayne D. Pennington (GMES) American Geosciences Institute past-president, recently concluded a tour for the new Science, Technology and Innovation Expert Partnership (STIEP) speaker series. Part of the US Department of State’s Targets of Opportunity Program, the STIEP speaker series promotes science diplomacy abroad by connecting traveling scientists with local embassies and other community networks in the region. Participants have the opportunity to exponentially increase the reach of their research while simultaneously promoting key issues for science diplomacy, including the importance of innovation, the scientific peer review process, and promoting women in STEM fields.

Pennington traveled to Tyumen, Russia, in December to teach a short course on seismic petrophysics for members of the oil and gas industry there. While in Tyumen, in collaboration with the consulate in Yekaterinburg, Russia, Pennington had the opportunity to address two universities through the STIEP speaker series. Pennington presented to Tyumen State Oil and Gas University on time-lapse seismic observations of unintentional regional gas blowdown in the Gulf of Mexico, and to Tyumen State University about methods of unconventional oil and gas development.

“Speaking with local communities and young geoscientists about my research and recent advances in technology in the US was an invaluable opportunity” said Pennington. “I was particularly touched by the sincerity and depth of interest of the students and young researchers at those universities. The STIEP speaker series helps bring researchers together to address global challenges facing the international scientific community. In this case, the sustainable development of oil and gas resources.”

EPSSI Speaker: Integrating ecosystem modeling and remote sensing to understand effects of hypoxia on the food web in the Northern Gulf of Mexico

Abstract: The Northern Gulf of Mexico (NGOMEX) experiences extensive seasonal hypoxia that is predicted to cause declines in the production of commercially and recreationally valuable fish and shellfish. In order to understand the direct and indirect effects of hypoxia on food web dynamics and ecological and economically important species, we developed an Atlantis ecosystem model and compared the model results to the available satellite remote sensing data. The Atlantis framework is a three-dimensional biogeochemical and biophysical modeling system that uses hydrodynamic model output as a forcing function and simulates biochemical cycles and food web interactions. Nutrient and field observations from 2003-2008, and from Southeast Area Monitoring and Assessment Program (SeaMap) were used to initialize the Atlantis ecosystem-based model and the in situ data were also compared to salinity, temperature and chlorophyll values from the available satellite imagery. This included coincident satellite data from the Aquarius satellite (salinity) the Moderate-resolution Imaging Spectroradiometer (MODIS) and the MEdium Resolution Imaging Spectrometer (MERIS). The output of the NGOMEX Atlantis model helped define the extent and seasonal timing of hypoxia on predator-prey interactions and directional change in the food web components. Our overall goal is to use these results to forecast the effects of hypoxia on NGOMEX living resources by uniquely combining both satellite and ecosystem based model results. 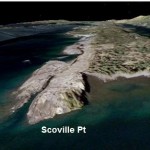 Jackie Huntoon, dean of the Graduate School and associate provost for graduate education, has been named to the American Geosciences Institute (AGI) executive committee.

Huntoon joins new members Berry H. (Nick) Tew, Jr., state geologist of Alabama and director of the geological survey of Alabama; and Dorian Kuper, cofounder and president of Kuper Consulting LLC. The new members of the AGI Executive Committee will be installed at the Friends of AGI Reception during the Geological Society of America Annual Meeting in Charlotte, North Carolina.

According to AGI, Huntoon, “through her work as dean and at numerous geoscience societies and agencies, has helped increase diversity and strengthen the geosciences as a whole.”

Founded in 1948, the American Geosciences Institute is a nonprofit federation of geoscientific and professional associations that represents more than 250,000 geologists, geophysicists and other earth scientists.

The Secret to a Successful Career in Mining 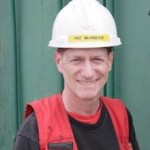