Eagle Mine is collaborating with Michigan Tech’s Mining Engineering Program on creating a custom-made simulation program with dynamic visualization to model and analyze the effectiveness of emergency evacuation plans and equipment in the operation.

“It’s just a start. We look forward to developing our relationship with the Lundin’s Eagle Mine and conducting various simulation studies, while looking for mutual benefits,” stated Ebrahim Tarshizi, the principal investigator of this research investigation.

Eagle Mine, a subsidiary of Lundin Mining, is a high-grade nickel and copper underground mine located in Michigan’s Upper Peninsula.

From Tech Today, by Ebrahim Tarshizi.

Today, June 22, 2016, several geoscientists will host a public discussion about the Keweenaw Geoheritage Project. The event begins with a wine and cheese reception at 6:30 p.m. followed by the presentation at 7 p.m. at the Quincy Mine Hoist.

Two special guests will speak to options available for increasing awareness and economic and educational opportunities for the Keweenaw.

They are: Thomas Casadevall, the United State Geological Services chair of the U.S. National Committee for Geoparks, and Cecile Olive, project manager for the Puys de Dome and the Limagne Fault World Heritage Project in France.

The project is led by Bill Rose (GMES) and Erika Vye.

Discover magazine published an article about Dean Wayne Pennington’s (COE) research on the Menominee Crack, a strange geological disruption known as a pop-up.

Major geologic transformations don’t usually happen in real time without explanation — especially in seismically quiet areas like the Upper Midwest. So, when Michigan Technological University geophysicist Wayne Pennington saw reports about a crack the length of a football field suddenly appearing in some swamp and woods in the northern area of the state’s Upper Peninsula, he assumed it was a small landslide. 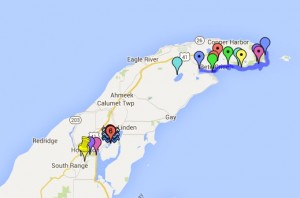 HOUGHTON — The Keweenaw Peninsula is a place of natural beauty with a fascinating mining history. Join local experts Bill Rose and Erika Vye in reading the landscape to learn how the Copper Country came to be the way it is today. In July Erika and Bill will lead one-day field trips exploring one of four major events in Earth’s history that make up the geology of the Keweenaw — Lavas, the Keweenaw Fault, the Jacobsville Sandstone, and Copper Mining Waste.

Cory Burkwald, a third-year Geology major, has been chosen to receive a Copper Club scholarship. The $10,000 award is for the 2016-17 school year.

Headquartered in New York City, the Copper Club Inc. is a leading organization for networking, educational grants and events for those who support the copper industry.

In a letter informing Burkwald of his scholarship, Andrew G. Kireta, Sr., executive director of the Copper Club, said, “through this program, the copper industry identifies and recognizes exceptional individuals who have excelled in the study of mining and metallurgy.”

Burkwald is Michigan Tech’s first recipient of a Copper Club Scholarship in the 20-year history of the award.

From Tech Today, by Geological and Mining Engineering and Sciences.

Ted Bornhorst, executive director A. E. Seaman Mineral Museum and professor, is co-author of a paper recently published by the international journal Economic Geology. The publication is a result of collaboration with Dr. Kei Ikehata of University of Tsukuba, Japan who is first author of the paper. The paper is titled “Hydrothermal Native Copper in Ocean Island Alkali Basalt from the Mineoka Belt, Boso Peninsula, Japan.” Additional co-authors are K. Chida and T. Tsunogae both at University of Tsukuba.

On Wednesday, May 11, faculty and staff members, along with their guests, gathered at the Memorial Union Ballroom for an awards dinner recognizing 25, 30, 35 and 40 years of service to Michigan Tech. The following GMES faculty member was recognized:

Alesky Smirnow (GMES), is the principal investigator on a project that has received a $5,000 research and development agreement from the U.S. Department of the Interior, Geological Survey. The project is “Magnetic Petrophysics of the Menominee Iron Range.”
This is a two-year project.

From Tech Today, by Sponsored Programs.