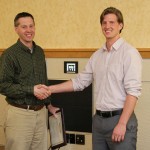 ME-EM Department lecturer Charles Margraves was awarded Teacher of the Year from The ME-EM Student Advisory Board.

At the annual ME-EM Senior Awards Banquet on April 17, several awards were presented to students.

Enterprise Students
Robert Page, advisor to the Hybrid Electric Vehicle Enterprise, nominated Travis Spilling for the Outstanding Enterprise Student award. For two semesters, Travis has served as the leader of the Mechanical Team, the largest team in the Enterprise with 23 students. He has provided strong leadership and organizational skills to the undergraduate and graduate students who work in the three sub-groups on this team. He has provided guidance on powertrain issues and has coordinated the development of several innovative solutions for the vehicle that will soon reach fruition. In addition, he has mentored several younger students who are now ready to step up to take their place as leaders. Travis’ dedication and humor will be greatly missed.

John Gershenson, Velovations Enterprise advisor, nominated Justin Schrand. Dr. Gershenson said Justin has led a year and a half long project that has resulted in two products and a wireless system that our sponsor is using to literally revolutionize the mountain bike industry. His great project leadership and work ethic led to great success.

Senior Capstone Design Students
Michele Miller nominated nominate Brian Oestreich from Team 2 Dual-Speed Auto-Shift Landing Gear sponsored by Jost International. The team developed a new trailer landing gear system. Producing a prototype that could achieve the project goals required a combination of creativity, analysis, practical know-how, adaptability, and, especially, hard work. The whole team contributed to the success of the project, but Brian, in particular, lived this project. If you look up gearhead in the dictionary, you might find Brian’s picture. He brought considerable knowledge and skill to the project, and, with the many hours put into this project, became that much more expert in the design and fabrication of complex gear systems.

Chuck Margraves, advisor for Team 7 Diesel Engine Air Shutoff Valve sponsored by Cummins, nominated Jay Anderson, saying he found Jay to be one of the most proactive students he has dealt with. Jay continually kept to the teams schedule and was not derailed when there were unexpected delays. He showed a maturity well beyond his years in not panicking when it looked like an important piece of equipment would not be delivered on time. Instead he and the team focused on completing all other necessary tasks so that when the equipment did arrive they would be ready to go.

Finally, Advisor Mike LaCourt nominated two students, Neil Rumschlag and Tyler Muckenhirn, from Team 11 Hydraulic Power Unit Efficiency Optimization sponsored by MTS. Mike said that Neil has been very inspirational throughout the project. He has worked well with all of the team members asking them to work in the areas where there experience can be most beneficial to the project. From his previous experience he has brought leadership and insight that has been beneficial from the start of the project to its successful completion. Tyler, although a late addition to the team, has shown that he can produce in an environment that is new and challenging, bringing a positive, enthusiastic demeanor and strong work ethic. Through his leadership, the team looked at expanded areas of design and analysis that helped the project be something that the customer and the university can look at as a success story.

Link to Photos of the ME-EM Senior Awards Banquet 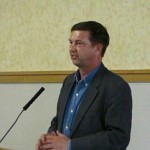 After graduating from Michigan Tech with a BSEE in 1976, the L’Anse, Michigan native John Soyring joined IBM. During his 36 career with IBM, he has held a variety of technical, professional, managerial and executive positions within the company.

In addition to John’s normal IBM duties, he has successfully lobbied members of the US congress to support the normalization of trade with both China and Singapore. John was also involved with IBM’s work to convince the Chinese Communist Party to allow citizen’s of the People’s Republic of China to have access to the internet.