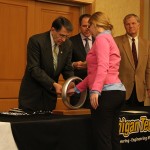 The December 2012 graduates of Michigan Technological University Department of Mechanical Engineering-Engineering Mechanics were honored at the Senior Awards Banquet December 11, 2012 at the Memorial Union Ballroom. The graduating seniors were presented with a ring for induction into the Order of the Engineer. 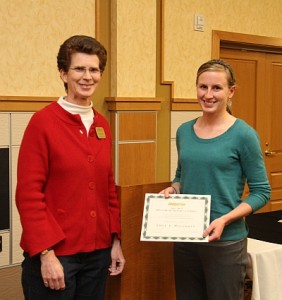 Emily Westerman was nominated by John Gershenson for Outstanding Enterprise Student. Emily Westerman has been a part of the Velovations Enterprise for 3+ years. It started with an email on October 21, 2009, “Hi, I am interested in joining the enterprise and I was wondering how I can get involved. Thank you, Emily Westerman.” After first coming on to a project where she helped finish off work on a novel chamois design for bike shorts, she became the first student to be promoted to a project leader in their sophomore year. Beginning with the first version of the incredibly successful Cane Creek project, Emily led three separate projects over the course of the last three years. It was the middle one where she earned her fame however. Working for Saris on a project to understand rider comfort on trainers, Emily led one of the hardest deadline projects we have ever undertaken. We never should have undertaken the project, but she got it all done on time with a delighted sponsor. All projects exceeded sponsor expectations, leading to follow on projects. Emily has been and will be an outstanding team leader, and a great engineer. 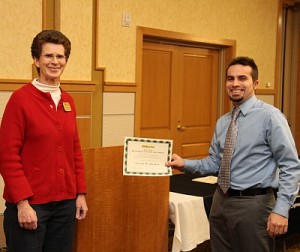 Nominated by Michelle Miller, the Senior Capstone Design outstanding student awardee Josiah Hooker is part of the GM sponsored handcycles project. His 8 person team produced one of two handcycles that were on display at the Army-Navy game last weekend. The large team started in the spring as two four person teams and then combined into one team at the beginning of the fall semester. The combined team has been more than the sum of its parts. The whole team came together well to produce a great product. Josiah was responsible for one of the design innovations of a new fork attachment that allows the bike to be reduced in size for transportation without significant disassembly. He was also invaluable as a go-to manufacturing person who did a lot of machining and welding and worked extensively with others on the team in these tasks. 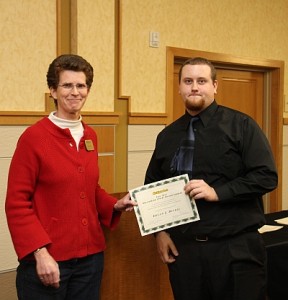 The third awardee, nominated by Chuck Margraves, is Dylan Beyrle. Dylan is a member of the air knife optimization team sponsored by ArcelorMittal. According to Dr. Margraves, Dylan has been an extraordinarily focused and disciplined worker. He has been involved in all aspects of the project from the preliminary CFD analysis, to construction and testing of the final design. He has shown outstanding leadership qualities and has been very easy to work with. The team as a whole also deserves recognition for their work. Dr. Margraves commented that “this has been one of my best experiences as an advisor.”

View the Photo Set “ME-EM Senior Awards Banquet and Order of the Engineer: December 2012” on Flickr 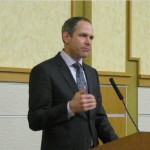 Eric graduated from Michigan Technological University with a Bachelor’s Degree in Mechanical Engineering in 1993. He began his career as a Manufacturing / Process Engineer with Kimberly-Clark in New Milford, CT. Mr. Roberts relocated to the Chicago area as a Senior Program Engineer in the New Product Development Organization with Sanford Corporation. Eric was selected to be the Engineering Operations interface with a Consulting Firm on a corporate-wide operations efficiency improvement initiative.

Mechanical Engineering R&D Group inside Motorola, as Director of Operations of the Enterprise Business Unit in Motorola Mobility, a developer, marketer and seller of Cellular Infrastructure Equipment. His role involved global, cross-functional management of all aspects of the business, including Engineering, Product Management, Sales, Marketing and PR.

Eric spent the next 14 years in various roles – predominantly focused on New Product Development and Operations, across all Hardware and Software Development disciplines. Mr. Roberts left Motorola Mobility following Google’s acquisition in June of 2012, and has spent much of his time building a computer school in Haiti and searching for the next big thing.