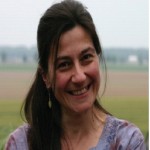 Title: Control of Powertrain Systems at the High Efficiency Limit

The protagonist of this story is a gasoline engine with a confused identity, often called DiesOtto, featuring unstable behavior and a potential for high-efficiency. Several independent short stories on stressed-out batteries and dead-ended fuel cells will highlight the challenges in understanding, modeling, and controlling highly efficient power conversion on-board a vehicle.

Anna G. Stefanopoulou is a professor of Mechanical Engineering at the University of Michigan and the Director of the Automotive Research Center a university-based U.S. Army Center of Excellence in Modeling and Simulation of Ground Vehicles. She obtained her Diploma (1991, Nat. Tech. Univ. of Athens, Greece) in Naval Architecture and Marine Engineering and her Ph.D. (1996, University of Michigan) in Electrical Engineering and Computer Science. She was an assistant professor (1998-2000) at the University of California, Santa Barbara, a technical specialist (1996-1997) at Ford Motor Company and a visiting professor (2006) at ETH, Zurich. She is an ASME and an IEEE Fellow, the Inaugural Chair of the ASME DSCD Energy Systems Technical Committee, a member of the SAE Dynamic System Modeling Standards Committee and a member of a U.S. National Academies committee on Vehicle Fuel Economy Standards. She has co-authored a book on Control of Fuel Cell Power Systems, 10 US patents, 5 best paper awards and 200 publications on estimation and control of internal combustion engines and electrochemical processes such as fuel cells and batteries.