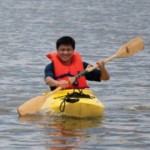 The Ocean is playing an ever more important role for the future of mankind. Larger variety of marine robots have been developed and commercialized during the last two decades. These robots may serve as networked mobile sensing platforms that are able to collect data in the maritime environment in unprecedented ways, which post higher goals for autonomy never achieved before. This talk introduces our recent contributions on a multidisciplinary investigation of autonomous collective foraging in a complex environment that explicitly integrates insights from biology with models and provable strategies from control theory. The methods are rigorously developed and tightly integrated with experimental effort.

Dr. Fumin Zhang is Associate Professor in the School of Electrical and Computer
Engineering at the Georgia Institute of Technology. He received a PhD degree in 2004 from the University of Maryland (College Park) in Electrical Engineering, and
held a postdoctoral position in Princeton University from 2004 to 2007. His research
interests include mobile sensor networks, maritime robotics, control systems, and theoretical foundations for cyber-physical systems. He received the NSF CAREER Award in September 2009, the Lockheed Inspirational Young Faculty Award in March 2010, the ONR Young Investigator Program Award in April 2010, and the GT Roger P. Webb Outstanding Junior Faculty Award in April 2011. He is currently serving as the co-chair for the IEEE RAS Technical Committee on Marine Robotics, and the chair for the IEEE CSS Technical Committee on Robotic Control and Manufacturing Automation.