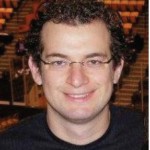 Title: Ankle impedance and ankle angles during step turn and straight walk: implications for the design of a steerable ankle-foot prosthetic robot

During locomotion, turning is a common and recurring event which is largely neglected in the current state-of-the-art ankle-foot prostheses, forcing amputees to use different steering mechanisms for turning, compared to non-amputees. A better understanding of the complexities surrounding lower limb prostheses will lead to increased health and well-being of amputees. The aim of this research is to develop a steerable ankle-foot prosthesis that mimics the human ankle mechanical properties. I will present the results of a series of experiments that were conducted to estimate the mechanical impedance of the human ankle when muscles were fully relaxed and co – contracting antagonistically. Also, the results of experiments on ankle rotations during different gait scenarios will be discussed to provide evidence that a multi -axis prosthesis may be needed to improve the mobility in amputees . The results of the aforementioned experiments were used for developing the control strategy of the ankle -foot prosthesis. A prototype ankle-foot prosthesis capable of controlling both dorsi/plantarflexion and inversion/eversion using a cable driven mechanism was developed and assessed as part of a feasibility study. The design is capable of reproducing the angles required for straight walk and step turn; generates 712N of lifting force in plantarflexion, and shows passive stiffness comparable to a non-load bearing human ankle impedance. To evaluate the performance of the ankle-foot prosthesis, a circular treadmill was developed to mimic human gait during steering. Preliminary results show that the device can appropriately simulate human gait with loading and unloading the ankle joint during the gait in circular paths.

In 2011 Evandro Ficanha completed his undergraduate degree as a mechanical engineer with a minor in Math at Michigan Tech. During his undergrad studies he worked at the Math Learning Center and did undergraduate research with different professors at the Mechanical Engineering Department. In his senior design project he helped to develop a hybrid electric bicycle to be used as an educational platform for teaching the technology concept in hybrid vehicles. Evandro received the “Outstanding Student Awards” for his senior design work. His current graduate research is focused on the development of powered ankle foot prosthetic robots capable of mimicking the mechanical properties of the human ankle. Also, he is a teaching assistant for Robotics and Mechatronics lab since 2012, where he has been continuously involved in reinvigorating the laboratory experiments and syllabus. In 2012, He received the “Outstanding Graduate Student Teaching Award” for his teachings efforts in the Robotics and Mechatronics lab.