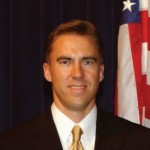 Ion thrusters, plasma rockets, and arcjets sound like the stuff of science fiction, but in reality there are more than 200 spacecraft currently in orbit that utilize these technologies. Collectively these devices are known as ‘Electric Propulsion’ (EP) since they use electrical energy to eject ionized propellant and create thrust. EP devices are used on satellites as large as 5,000 kg and also on nanosatellites as small as 1 kg. The Ion
Space Propulsion Laboratory at MTU is actively developing thrusters that cover this entire range. This seminar will present an overview of the physics and performance limitations of EP devices in general. The talk will then describe a number of active research projects at MTU including metal-propellant Hall-effect thrusters, electrospray thrusters, and exotic devices that use ferrofluids as propellant.

Dr. Lyon (Brad) King is presently the Ron and Elaine Starr Professor of Space Systems Engineering at Michigan Technological University. Dr.King earned his Ph.D. in Aerospace Engineering from the University of Michigan in 1998. Prior to joining Michigan Tech Dr. King was a Postdoctoral Research Associate at the National Institute of Standards and Technology Ion Storage Group in Boulder, CO. Dr. King is an experimentalist with expertise in plasma physics, spacecraft design, and electric space propulsion systems. King shared the AIAA Outstanding Paper in Electric Space Propulsion in 1999 with co-author, Dr. Alec Gallimore, for studies of particle transport in Hall Thrusters. King is presently an Associate Editor of the AIAA Journal of Propulsion and Power. King was a past Fellow of the NASA Institute for Advanced Concepts (NIAC), a member of the NASA Nuclear Space Propulsion Technology Assessment Group, and a member of the Joint Army-Navy-NASA-Air Force Space Propulsion technical From 2009 to 2011 King was the Chair of the AIAA Electric Propulsion Technical Committee. King is a recipient of the National Science Foundation Faculty Early Career Award (CAREER) and the SAE International Ralph R. Teetor Engineering Educator Award. In 2004, King received the Presidential Early Career Award for Scientists and Engineers in a White House ceremony for DoD-sponsored research related to advanced space propulsion systems.