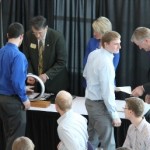 The ME-EM Order of the Engineer, Senior Awards Banquet and Capstone Design Day was April 22, 2013 at the Rozsa Center Lobby.

The keynote speaker for the banquet was Ms. Lee Ann Rouse, President and CEO Omni Tech International Ltd. Lee earned a bachelor’s degree in Mechanical Engineering from Michigan Tech in 1987.

After graduating from Michigan Tech, Lee began her career working for Dow Chemical in Midland, Michigan as a Technical Service & Development Engineer in Dow Plastics. She later moved into Environmental, Health & Safety managing Dow’s health promotion and health services functions. After ten years at Dow, Lee started her own consulting firm, On Track Training & Consulting which later merged with Cornerstone Consulting. In 2000, Lee began working with Omni Tech International, Ltd. – a technical and business consulting firm headquartered in Midland, where she is President and CEO.

In addition to managing the company, Lee works as a consultant in the quality and business arena, and has authored and facilitated many training courses. Lee has received several special recognition awards for her client and work efforts and several community leadership awards including the Athena Leadership Award, the Midland Chamber Director’s Award, and the Vista award for Leadership. Under her direction, Omni Tech was named one of the 50 Best Companies to watch in Michigan and also received the Midland Innovator Award.

While a student at Michigan Tech, Lee was a member of the Memorial Union Board, Student Entertainment Board, the Society of Women in Engineering (SWE), and the Society of Manufacturing Engineers (SME). She has maintained her connection with Michigan Tech by returning to campus as a recruiter for coop and full-time employees and as a speaker and facilitator for different programs.

Earlier in the day, the mechanical engineering-engineering mechanics department held its semi-annual Senior Capstone Design Day Program. Seventeen teams will present the fruits of their efforts over the past two semesters during presentations to industry reps, faculty, staff, students and MEEM External Advisory Board members. The teams will also display posters and, in some cases, their prototypes in the rear first-floor hallway of the MEEM building. This year’s project customers include Chrysler, John Deere, the Michigan Tech Rail Transportation Program, the Quincy Mine Hoist Association, The Modal Shop and others. All presentations, except HGS Aerospace, are open to the public.

Nancy Barr has been named an Outstanding Link Coordinator by the Recognition Committee of the Order of the Engineer.

Barr, the Senior Design and technical communications advisor for the Department of Mechanical Engineering-Engineering Mechanics, is one of four link coordinators in the nation to receive this honor. Link coordinators are instrumental in organizing their units’ Ring Ceremony, inducting graduates into the Order of the Engineer.

Barr has been coordinating the department’s Order of the Engineer events at Michigan Tech since 2007. Since then, she has been responsible for the induction of over 1,200 mechanical engineering graduates during two annual ceremonies.

“Nancy’s been organizing the Senior Recognition Banquet, which includes the Ring Ceremony, since she started with us,” said Bill Predebon, chair of the MEEM department. “She coordinates all the activities seamlessly, and thanks in large part to her efforts, nearly all of our graduates attend and are inducted into the Order of the Engineer.”