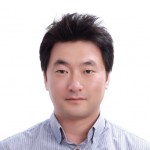 The ME-EM Graduate Seminar speaker on Thursday, October 23rd at 4:00 in 103 EERC will be Dr. Dong Hwan Shin a post doc in the Mechanical Engineering Department at Michigan Tech.

The title of his presentation will be ‘Local Aggregation Characteristics and Visualization of Intermediate Layers during Evaporation of Nanofluid Droplets’.

Recently, nanofluids (NF) are of substantial interest because of their potentials in exhibiting improved thermal performance. Thus, nanofluids are expected as the next generation of cooling fluids for automobiles and electronic devices. One of Dr. Shin’s research interests is about characterization of nanofluid droplet evaporation by using confocal and regular inverted microscopic systems. This presentation will introduce his recent work regarding the nanofluid droplet evaporation: Evaporation characteristics of nanofluid droplets with various volume fractions of 50 nm alumina (Al2O3) particles are experimentally examined. The effect of particle concentrations on droplet evaporation rates is examined. The corresponding wettability changes and the total evaporation time are also examined. Besides, he will also introduce the spatial non-uniformity of suspended nanoparticles in the droplet caused by the local aggregation visualized by using the inverted microscope system. The results show that the effective thermal conductivity should be changed according to the non-uniform distribution of nanoparticles inside a droplet on the surface. Next, the contact lines of nanofluids droplets during evaporation are visualized using a high-speed reflected mode slit-confocal. The present work deals with a challenging issue on the experimental visualization of the intermediate layer because the conventional optical approach cannot visualize this layer due to the optical limitation. The intermediate layer thickness varies with time during evaporation, which is observed based on the fringe pattern analysis. Those results show the feasibility of using fringe patterns of contact lines can provide instability of a contact-line region in the thin film and further explain heat and mass transfer in this region.