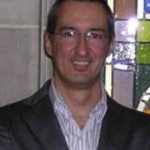 The ME-EM Graduate Seminar speaker on Thursday, February 19 at 4:00 in 103 EERC will be Dr. Fabio Semperlotti from University of Notre Dame.

The title of his presentation will be ‘Structural Dynamics Tailoring for Health Monitoring and Acoustic Metamaterials Applications’.

In recent years, structural systems of interest for many mechanical and aerospace applications have been required to integrate new functionalities ranging, for example, from structural health monitoring, to adaptive vibration and acoustic control, to energy harvesting. In many cases, new technologies (e.g., transducers, adaptive elements) have been simply retrofitted to the existing structures. Although for structures already deployed in the field this approach might be the only viable option, the development of future structural systems could greatly benefit from the use of a concurrent design where the host structure is conceived as an integral part of the subsystems and developed to enhance their individual as well as combined performance and functionalities.

This presentation will focus on the concept of structural dynamics tailoring achieved via geometric inhomogeneity as a means to design structural systems that support, and possibly enhance, the integration of advanced functionalities. Although applications to several different fields are possible, this talk will present the theoretical and numerical implementation of this concept for the design of structural health monitoring (SHM) systems and acoustic metamaterials. The SHM application will show how a relatively recent tomographic technology, known as impediography, can be combined with the concept of structural tailoring to enable highly sensitive damage identification with a very limited number of sensors. The structural tailoring approach is then applied to the synthesis of thin-walled acoustic metamaterials obtained via a periodic distri-bution of geometric tapers. These materials offer a largely reduced fabrication complexity, compared to the traditional multi-phase design, while still maintaining the same high-level dynamic characteristics. Numerical results will be presented to illustrate the many interesting disper-sion and propagation properties offered by such materials.

Prior to joining Penn State, Dr. Semperlotti served (2000-2006) as structural a few European aerospace industries, including the French Space Agency (CNES), working on the structural design of space launch systems and satellite platforms.

After graduating from Penn State, he worked as a postdoctoral associate at the Penn State-Vertical Lift Research Center and, later on, at the University of Michigan conducting research in Adaptive Structures and Structural Health Monitoring.

Dr. Semperlotti joined the AME department at Notre Dame in 2011 where he started the Structural Health Monitoring and Dynamics laboratory (SHMD). Together with his research group, he conducts research on several aspects of structures and materials including structural dynamics and wave propagation, smart and adaptive structures, structural health monitoring, energy harvesting. His re-search has received funding from US ARMY, DARPA, National Science Foundation, Air Force, and industrial sponsors. He was recently awarded the National Science Foundation CAREER award (2015) for his research on Structural Health Monitoring and the Air Force Office of Research Young Investigator Program (YIP) (2015) for his research on acoustic metamaterials.