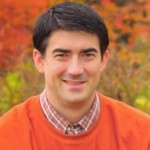 The ME-EM Graduate Seminar speaker on Thursday, September 10 at 4:00 in 103 EERC will be Dr. Brandon Dilworth from MIT Lincoln Laboratory.

The title of his presentation will be ‘LLCD Experimental Line-of-Sight Jitter Testing’.

The Lunar Laser Communication Demonstration (LLCD) program at MIT Lincoln Laboratory is the first space laser commu-nication system for NASA. The optical communications terminal will be carried into lunar orbit by the Lunar Atmosphere and Dust Environment Explorer (LADEE) spacecraft which launched on September 6, 2013. The primary goal of the LLCD program is to demonstrate optical communication from lunar orbit to the Earth’s surface.

Optical communication systems have many advantages over radio frequency (RF) systems which include achieving higher data rates using lower size, weight and power (SWaP). Optical communication systems rely on much narrower beams than RF systems to achieve these advantages; the penalty is that the optical beam must have good stability in order to maintain the communication link between the transmitter and receiver. There are a number of factors that play a role in the stability of the optical beam, but the focus of this talk is on the residual line-of-sight (LOS) jitter resulting from unrejected spacecraft excitation.

During early program development mathematical analyses, starting from simple hand calculations and evolving through complex computational techniques, are used to drive the design. As with any type of analytical analyses, many assumptions are used to identify different characteristics of the system. As programs develop, these mathematical models are used to drive the design so there is a strong desire to validate these models as the design continues to mature. Experimentation with physical hardware is a common method for validating mathematical models, including residual LOS jitter models. The LLCD program developed a test bench in order to validate the residual LOS jitter model which provides higher confidence in the computational results.

This presentation will provide an overview of the LLCD program, summarize some of the components of the Optical Module and to describe the efforts behind validating the residual LOS jitter model using experimental techniques.
This work is sponsored by the National Aeronautics and Space Administration under Air Force Contract #FA8721-05-C-0002. Opinions, interpretations, conclusions and recommendations are those of the author and are not necessarily endorsed by the United States Government.

I graduated from Michigan Tech with Master’s in 2006 and PhD in 2009 working in the Dynamic Systems Lab under Jason Blough. My focus was on structural dynamics and acoustics with heavy emphasis on experimental techniques and signal processing.

I started working at MIT Lincoln Laboratory immediately after graduation from Tech in 2009 as part of the Mechanical Engineering Group within the Engineering Division. My first pro-gram involvement at Lincoln was on the Lunar Laser Communication Demonstration (LLCD) program sponsored by NASA – which some of the work is highlighted during this seminar. For the LLCD program, I worked as a unit lead/design engineer and as a test development engineer. Since the successful completion of LLCD, my primary efforts have been as the Lead Engineer of a ground terminal for generic free space laser communication diagnostics.

My design efforts on LLCD were recognized with two Group merit awards in 2011. I received the Division Early Career Award in 2012. The LLCD team received the Laboratory Team Award in 2013. I was also part of a team investigating a short-term, high visibility effort which received the MIT Excellence Award in 2015. I currently sit on the Advanced Concepts Committee within Lincoln which focuses on development of new and novel technologies of national interest.