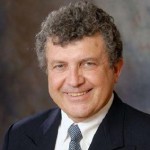 The ME-EM Graduate Seminar speaker on Thursday, September 17 at 4:00 in 103 EERC will be Dr. Moshe Matalon from the University of Illinois at Urbana-Champaign.

The title of his presentation will be ‘The “Turbulent Flame Speed” – Recent Developments’.

The determination of the turbulent flame speed is of great practical importance providing, for example, the mean fuel consumption rate in a combustor operating under turbulent conditions. Early phenomenological studies resorted to geometrical and scaling arguments to deduce expressions for the turbulent flame speed. Similar expressions were later derived for weakly wrinkled flames by more rigorous multi-scale asymptotic methods. The common denominator of these expressions is an increase in turbulent flame speed due to an increase in flame surface area, with a quadratic dependence on turbulent intensity. The objective of this work is to extend these results to higher turbulence levels where the effects of flame folding and creation of flame pockets become ubiquitous and have nontrivial implications on the flame propagation speed. A related question pertains to the influence of the hydrodynamic, or Darrieus-Landau (DL) instability, whether it remains of significant importance in affecting the propagation as it does under laminar conditions. The analysis is carried out using a hybrid Navier-Stokes/front-capturing methodology within the context of the hydrodynamic theory, that permits extracting scaling laws for the turbulent flame speed that depend on turbulence and combustion characteristics as well as on flow conditions, but without invoking turbulence modeling assumptions or introducing adjustable parameters. For simplicity we have considered here “two-dimensional turbulence” and limited the discussion to positive Markstein length (such as, lean hydrocarbon-air or rich hydrogen-air mixtures) where thermo-diffusive effects do not further contaminate the flame surface with additional small structures. Our results show the existence of distinct regimes, clearly delineated by statistical properties of various flame characteristics where the influence of the DL instability is absent, dominant or shadowed by the turbulence. Of greatest importance is the dependence of the turbulent
flame speed on turbulence intensity, which is shown to transition from a quadratic law at low intensities to a sub-linear scaling at higher turbulence levels, in agreement with the experimental record. The increase in speed with increasing turbulence intensity is primarily due to the increase in the flame surface area as envisioned by the pioneering work of Damköhler, while the leveling in the rate of increase of the turbulent flame speed with turbulence intensity (the so-called bending effect) is partially due to frequent flame folding and detachment of pockets of unburned gas from the main flame surface area, and partially due to flame stretching.

Moshe Matalon received his Ph.D in Mechanical and Aerospace Engineering from Cornell University in 1978. After two years on the faculty of the Aerodynamics Laboratories of the Polytechnic Institute of New York, he joined the McCormick School of Engineering and Applied Science at Northwestern, where he was Professor of Engineering Sciences & Applied Mathematics and Professor of Mechanical Engineering, until 2007. He is since in the Department of Mechanical Science and Engineering at the University of Illinois Urbana-Champaign where he holds the College of Engineering Caterpillar Chair. His research interests are in combustion theory, theoretical fluid mechanics and applied mathematics. In combustion, he made contributions to a wide range of topics including the structure, dynamics and stability of premixed and diffusion flames, combustion instabilities and combustion of heterogeneous fuels, and turbulent combustion. Matalon is Fellow of the American Physical Society (APS), Fellow of the American Institute of Aeronautics and Astronautics (AIAA) and Fellow Institute of Physics (IOP). Among his honors and awards is the Pendray Aerospace Literature Award of the American Institute of Aeronautics and Astronautics. Professor Matalon serves as Editor-In-Chief of Combustion Theory and Modelling and as Associate Editor of the Journal of Fluid Mechanics.