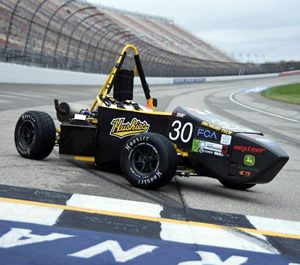 Members of Michigan Tech’s Enterprise competition teams in Formula I, Supermileage, Baja and Clean Snowmobile will visit with eighth-grade students at Houghton Middle School on April 26, 2019.

The eighth graders have been engaged in four-week long STEM projects led by Michigan Tech students and their instructors. These projects have immersed the middle school students in the engineering and testing of fuel cell automobiles. The project incorporates many science standards and practices. Today’s visit by the Enterprise teams, along with their vehicles, is the culmination of these projects.

The vehicles will be on display outside the Houghton Middle School from 10 a.m. to 2:30 p.m. In addition, there will be demonstrations.

Friday, the Tech students brought vehicles from the Clean Snowmobile Challenge, Baja and Formula Enterprise teams to explain the competitions to students.

Eighth-grader Katy Fay said the Tech students had been helpful in the projects, and in teaching the components of cars and fuel cells.

“I had no idea what it was,” Fay said of the fuel cell. “It looked just like a box. Now I know what it is, and how it actually can power things.”

Fay, who is considering becoming an engineer, said after some tinkering, her team had gotten its vehicle to travel far.

“It started pretty rocky, but we got it together,” she said.