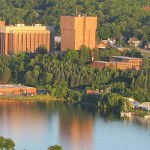 Jeff Naber (MEEM/ASPRC) is Principal Investigator on a project that has received a $481,013 research and development contract with the Alliance for Sustainable Energy, LLC. Youngchul Ra (MEEM), Mahdi Shahbakhti (MEEM), Jeremy Worm (MEEM), Henry Schmidt (MEEM), Paul Dice (MEEM), and Joel Duncan (MEEM) are Co-PI’s on this project entitled, “A Compression-Ignition Mono-Fueled NG High-Efficiency, High-Output Engine for Medium and Heavy-Duty Applications.” This is the first year of a potential three-year project totaling $1,156,042.

Jeff Naber has been nominated as an associate member of the U.S. Department of Energy (DOE) United States Driving Research and Innovation for Vehicle efficiency and Energy sustainability (U.S. DRIVE) Committee.

It is a three year term starting September 2019. It involves direct meetings between the OEM’s and DOE’S Energy Efficiency & Renewable Energy (EERE) Vehicle Technologies Office (VTO) at a high level.

The American Council of Engineering Companies (ACEC) tech team is part of the U.S. DRIVE partnership. This partnership is between the U.S. Council for Automotive Research LLS (USCAR) and the DOE.

Gurpreet Singh, Advanced Combustion Engines and Fuels R&D Program Manager, Vehicle Technologies Office, DOE, is the other co-chair. Other members of the team include combustion and emission control experts from FCA, GM and Ford as well as a broad spectrum of representatives from the DOE and U.S. national labs (Argonne, Oak Ridge, Sandia, NREL, Lawrence Livermore, Pacific Northwest).

The committee meets six times a year at the USCAR office in Southfield, MI, to discuss pre-competitive technology and research to improve engine efficiency while meeting emission standards.

Jeff Naber (ME-EM), the Richard and Elizabeth Henes Professor in Energy Systems and director of the Advanced Power Systems Research Center, has been appointed to the Executive Committee of the Automotive Research Center (ARC) by the center’s director Bogdan Epureanu.

The ARC is a US Army Center of Excellence for Modeling and Simulation of Ground Vehicles sponsored by Ground Vehicles Systems Center (formally TARDEC in Warren, Michigan) and led by the University of Michigan.

Nancy Barr (Eng Com) presented a paper titled, “Divergent Courses: Preparing Graduate Students for Diverse Career Paths,” at the IEEE Professional Communication Society Conference in Aachen, Germany, July -24-26, 2019. The paper describes a two-course sequence in the ME-EM graduate engineering program that addresses the unique needs of students interested in either industry career paths or academia, regardless of language background. One course prepares students for communicating persuasively and collaboratively in business environments, while the second course focuses on the traditional research genres of journal papers, conference presentations, and grant proposals. Also, as secretary to the society’s Board of Governors, Barr attended the board’s annual meeting prior to the conference.

Among the seven appointees is Jeremy J. Worm, associate director of APS LABS and director of Mobile Lab at Michigan Technological University. He earned his PhD in Mechanical Engineering from Michigan Technological University. Dr. Worm is appointed to succeed Daniel Blower, whose term expires August 4, 2019, to represent four-year colleges or universities for a term commencing August 5, 2019, and expiring August 4, 2021.

The Michigan Truck Safety Commission (MTSC) is the only organization in the nation dedicated to commercial truck driver education and training supported solely by the industry it serves. The Commission is committed to enhancing truck and truck driver safety by providing truck driver education and training, heightening all drivers’ awareness of the operational characteristics and limitations of trucks, initiating data collection and research, and supporting enforcement of motor carrier safety laws.

These appointments are subject to the advice and consent of the Senate.

Read more at TV6 FOX UP.

A Michigan Tech assistant professor in Mechanical Engineering-Engineering Mechanics is among those being honored with awards from SAE Engineering.

Honorees are recognized for their outstanding, sustained contributions to support SAE Engineering Events.

Robinette is currently an assistant professor in the Mechanical Engineering-Engineering Mechanics at Michigan Technological University, a position held since August of 2016.

Read more at the Keweenaw Report.

Susanta Ghosh (MEEM/MuSTI) is Principal Investigator on a project that has received a $170,604 research and development grant from the National Science Foundation. The project is titled “EAGER: An Atomistic-Continuum Formulation for the Mechanics of Monolayer Transition Metal Dichalcogenides.” This is a potential 19-month project.

To achieve broader use of TMDs across cutting-edge applications, complex deformations for large-area TMDs must be better understood. Large-area TMDs can be simulated and analyzed through predictive modeling, a capability that is currently lacking. 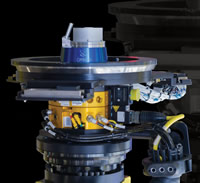 US DOE Funding for Sajjad Bigham

Sajjad Bigham ( MEEM/APSRC) is Principal Investigator on a project that has received a $534,565 research and development cooperative agreement with the US Department of Energy. The project is titled “Next-Generation Desiccant-Based Gas Clothes Dryer Systems.” This is a potential three-year project.

Paul van Susante (MEEM) presented during the Moon Development & Exploration track at the International Space Development Conference in Arlington, VA on June 8, 2019, about “Lunar ISRU and Design and Sizing of Regolith Excavation & Handling Hardware.” He participated/organized a workshop/panel session on “ASCE Resources and Standards workshop.”

He also participated in the Space Resources Roundtable in Golden, CO from June 10 to 15 and chaired Technical Session 4 on Space Manufacturing and Processing Technologies, presented a paper during the “Mars Resources” track on ” Poly-Hydrated Sulfate Mining and Water Extraction on Mars: Experimental Results and System Requirements.”