Prof. Patrick Martin and Ph.D. candidate Sean Gohman of Social Sciences have been awarded a two-year grant for archaeological surveys at Fort Wilkins State Park in Copper Harbor.  The grant, for  $19,487 each year (total of just under $39,000), comes from  the Michigan Department of Natural Resources and will be used to support graduate students investigating the remains of the Pittsburg and Boston Copper Harbor Mining Company sit, now located on the Fort Wilkins property.  This summer and fall the crew of archaeologists from Social Sciences will survey the site, and next year do some selected test excavation and recordation. If funding becomes available in 2016 and beyond, the team hopes to continue similar work on the Copper Harbor Range Lighthouse site.

Fort Wilkins was built in 1844 by the fifth U.S. Infantry Regiment to keep order in the Michigan copper mining district, though it was abandoned two years later (but re-garrisoned from 1867-70). In the absence of the military (1847-66 and 1871-1923) civilians frequently occupied fort buildings as residences and later as hunting camps and cottages until the property became a state park in 1923. Today Fort Wilkins State Park interprets three primary themes: early Keweenaw copper mining by the Pittsburgh and Boston Copper Harbor Mining Company, Lake Superior maritime history with the Copper Harbor Lighthouses, and nineteenth-century military history at the fort itself.

Since 1974 the Michigan Historical Museum has been responsible for historical activities within the park. Today, there are nineteen historical buildings: twelve original structures from the 1840s and seven reconstructions based on the historical and archaeological record. Archaeological research has been carried out intermittently at the fort from 1975 to present under state contracts and over that time various projects have investigated a number of the military buildings, the fort’s blacksmith shop, the Copper Harbor lighthouse, various trash and dump sites (often excellent windows into past material culture) as well as parts of the Pittsburgh and Boston Copper Harbor Copper Mining Company activities. This current grant will support phase I and II (surface survey and selected test dings, respectively) archaeological projects in the P&BCMC site along the northern boundary of Fort Wilkins State Park along the southern shore of Copper Harbor.

Chelsea Schelly is just back from Munich where she participated in a workshop on “Greening of Everyday Life” at the Rachel Carson Center for Environment and Society at the Ludwig-Maximilians-Univeristät-München.  There she spoke on “Everyday Household Practice in Alternative Residential Dwellings: The Non- Environmental Motivations for Environmental Behavior.”

She has also recently had an article on her research on people who install solar energy panels published in Energy Research & Social Science.  The article is based on interviews with 48 Wisconsin residents who installed solar and Schelly looked at how the environmental and economic motivations related to the demographic characteristics of the adopters.  As she states in her abstract, the research “offer[s] general insight for understanding investment in renewable energy technologies at the residential scale, suggesting means of improving environmental and energy policy and highlighting avenues for future research.”  Read the abstract and article at “Residential Solar Electricity Adoption: What Motivates, and What Matters? A Case Study of Early Adopters,” Energy Research and Social Science 2 (2014:) 183-191.

A recent article in the Michigan Tech News highlighted Hugh Gorman’s book, The Story of N and how our current need to fix the nitrogen cycle bears a striking resemblance to problem in the carbon cycle that needs fixing.  Read the full story in the article entitled: “Before There Was C, There Was N: How Humans Derailed the Nitrogen Cycle and Are Trying to Put It Back on Track”

It also mentions that his article that came out of his work on the book, “Learning from 100 Years of Ammonia Synthesis: Establishing Human-Defined Limits through Adaptive Systems of Governance,” Gaia 22.4 (2013): 263-270, that won second place in Gaia’s Best Paper competition for 2013.  Congratulations, Hugh! 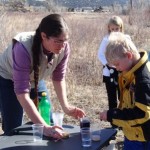 With many students thinking about what lies ahead after college, some may be thinking about graduate school or trying something completely new. But what if you could do both? Michigan Technological University offers programs that allow you to volunteer somewhere new and earn your graduate degree at the same time: Office of Surface Mining VISTA (OSM/VISTA) and the Peace Corps’ Paul D. Coverdell Fellowships.

Rhianna Williams is taking advantage of the OSM/VISTA program. Williams currently has a BS in Psychology and a MS in Library Science. She was working toward another master’s degree in environmental and energy policy until OSM/VISTA and Tech joined hands in 2012 and turned her in a new direction. “I joined for the opportunity to practice what I’d learned in the class out in the field,” she says.