The Annual Report for the 2014-15 Academic year has been published.  This year’s report includes information about:

The complete report is available on our website at: http://www.mtu.edu/career/about/reports/

STEMconnector searches for ways to develop talent needed by industry

Recently a group of over 300 industry and educational leaders meet in Washington D.C. to share and explore ways to fill the pipeline of human talent in the areas of science, technology, engineering, and mathematics. The group, called STEMconnector, is facing a growing crisis due to lack of qualified intellectual talent to meet company hiring needs. A series of industry leadership panels identified the challenges, then explored solutions that would not only improve individual lives, but support developing economies and governments across the globe.

STEM jobs, those careers focused on use of science, technology, engineering, and mathematics, are growing 1.7 times faster than that of non-STEM jobs. Surya Kant, President of North America, UK and Europe for Tata Consulting Services (TCS), a worldwide contractor for information technology talent, estimated that by 2030 they will need to hire 430,000 more STEM employees, a majority of which will be in the area of computer science and engineering. They have developed a new program called Go IT which is now being rolled out in 32 major cities across the world. The program engages students and their parents by introducing them to the basics of programming and exposing them to the many well-compensated careers in this area.

The U.S. Bureau of Labor Statistics predicts that between 2013 – 2023 there will be two jobs available for every computer science graduate in the U.S. Currently only 2.4% of college graduates earn their degree in computer science. TCS notes that 30 of 50 states do not require computer science courses in their graduation requirements, hindering efforts to get students engaged in programming early in their education.

Allyson Knox, Director of Education Policy & Programs at Microsoft, echoed concerns at TCS. She noted that 1 in 4 U.S. high schools offer advanced placement courses in computer science. She noted that research has found young women taking this course were 4 times more likely to complete a degree in computer science, while African-American and Hispanic students taking the course were 7 times more likely to achieve academic success in the degree.  Microsoft has created the website code.org to encourage students and their parents to explore computer programming. Filled with interactive games that increase in complexity, the site illuminates lucrative career paths in computer programming.

Dr. Mehmood Khan, Vice Chairmen and Chief Scientific Officer at Pepsico, shared the humanitarian opportunity associated with filling these talent needs. He noted that 40 percent of the food we grow is wasted. The main contributor of pollution in the world is agriculture. Dr. Khan shared that each day 1 billion people go to bed hungry.  He notes if we can cut our food waste in half, we can feed the world and not increase pollution. Yet he also highlighted that in the next 10 years 50 percent of our scientists working on this efficiency problem will be retiring.

Industry leaders created STEMconnector to help them address the looming talent shortage. They all recognize the solution does not lie in just higher education or exclusively in our K-12 school system. It is a societal challenge whose solutions lie in multiple initiatives and they are each taking individual and collaborative steps to fill the STEM pipeline. The quality of our lives in the future is directly correlated to the success of filling this STEM pipeline, as does the economic prosperity of our children. 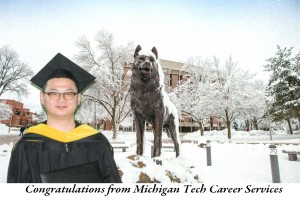 Graduation is the culmination of a lot of hard work and dedication.  As a way of saying “Congratulations” to our graduates, Career Services organized a photo booth to help commemorate the event.  With a green screen and choice of eight different Michigan Tech related backgrounds, students, their family, and their friends were invited to create “one last memory” of their time in Houghton.

Check out the results of the photobooth on Flikr.

We were pleased to have one of our Alumni share her stories with our students.  Allie Irwin (Engineered Conversations) visited campus to speak with students and faculty about how body language sends messages about listening, importance, honesty, and many other things without us being aware of it.

The summary of her visit is now available for review on: http://www.mtu.edu/career/students/resources/bodylanguage/

Preparing Students for their Co-op Experience

When a student leaves campus to begin a co-op or internship, they are faced with a challenge regarding their identity. After operating as a student for so long, they have to quickly transition to that of a professional, and sometimes for the first time. When done right, students feel an amazing sense of accomplishment – “I was treated like the other professionals.” With the right attitude and keen sense for polishing their professional skills, students can begin building a successful professional career and respected reputation during their co-op experience. And isn’t that the point?

However, we cannot assume that all students are prepared to make this transition; thus, to assist students in this process, Career Services requires all co-op students attend a pre-departure meeting. The topics in this meeting include networking, co-op course requirements, but most important are the keys to a successful co-op. Surprisingly to students, those who are successful are not always the most brilliant technically, but rather they shine because of their professionalism, attitude, and excellent communication skills. Check out this semester’s meeting.

One of the Michigan Tech Scholars and Leaders program, Katelynne Bauer, created a profile of some alumni and the different paths a chemical engineering graduate can take.

You can view the article online at: http://www.mtu.edu/career/students/resources/stories/

Graduation day is less than a week away! What is the ultimate result of all that hard work? Starting a job with a new company, applying those skills in a new occupation, and earning money!

We copied the idea of a high school recruit signing for a new college or a professional athlete getting drafted.  Here are some group photos next to our statue in the middle of campus. We think this new tradition will take hold!

Thank you to our corporate partners at: 3M, Alliance Laundry Systems, ArcelorMittal, Caterpillar, The Dow Chemical Company, Fiat Chrysler Automobiles, Ford Motor Company, Gerdau, Jackson, Kimberly-Clark, Nucor, Oshkosh, Plexus, and Systems Control. Our corporate partners help prepare our students for their careers and now, it is time to get to work! 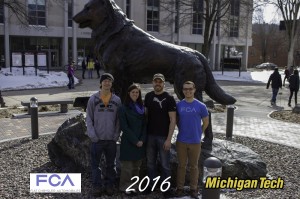 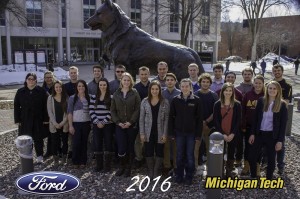 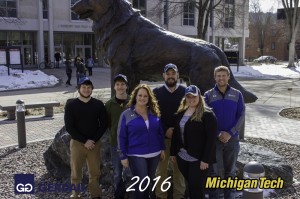 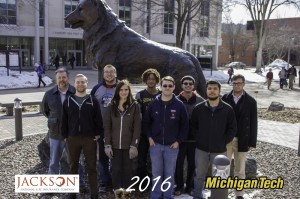 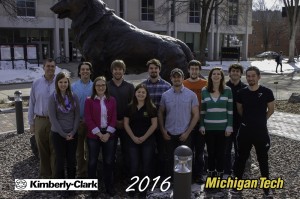 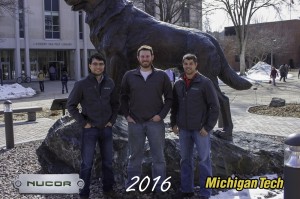 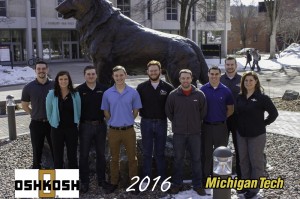 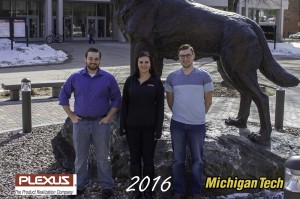 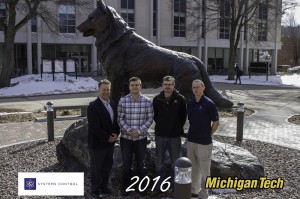 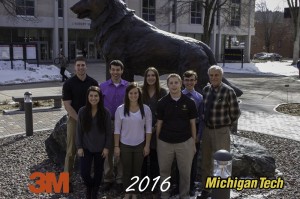 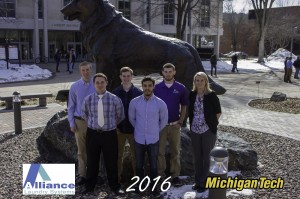 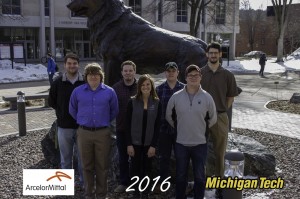 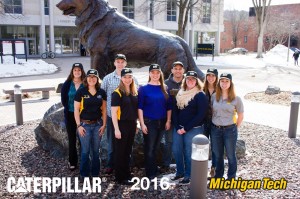 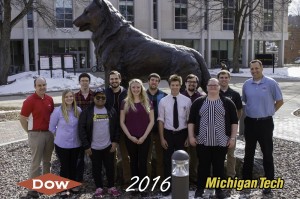 LinkedIn has created a new mobile app to help you with your job search.    The new LinkedIn Students app is now available for Both Android and iOS platforms. 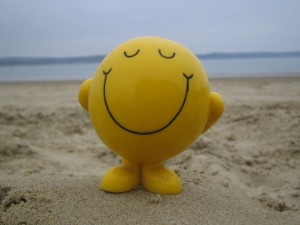 Students have worked so hard for their grades.  They have learned how to survive with messy roommates, impossible project assignments, harsh weather, homesickness, and the stress of a job search.  In the last few weeks of the Spring semester, can you blame them for being insufferably happy?

As these students count down the days until they graduate (it’s 22, by the way) – all of their hard work has paid off.  Although nobody knows what it is, they are ready to join the “real world”   As they strike out on their own, hopefully, the Career Culture that we have created on campus will propel them into their first destination.

The educational value of many the things the students have done may not be apparent to them.  There are a lot of technical skills learned in the classroom, but also a lot of other skills learned outside of the class that will help them succeed.  Late nights completing a project before a deadline, networking during a lunch, performing a presentation on a topic in front of their peers, entering a contest, or volunteering their talents to help someone else — these life lessons will serve them well.

To me, the perma-smile is a result of knowing that all the hard work is just beginning but the pay will be much better!

The value of knowledge lies in application

In 1982 a young man named Jim headed off to college. He knew he was good in math and science, but had no idea what career that would lead to. Like his fellow freshmen, he found college courses far more challenging than high school. Lacking a defined use for the knowledge he was acquiring and the mounting challenge to acquire it, he was headed for trouble.

Jim’s grades suffered and he was put on academic probation by the university. Finally, at the end of his sophomore year, he received a letter from the Dean of Students that he had been kicked out of school. Jim was crushed as he shared the devastating news with his parents. He had a choice to make, speak with the Dean to be reinstated or choose a different path. Jim choose to reach out to the Dean for reinstatement and give it another try.

As Jim returned to school his grades improved marginally, for he still had not figured out a use for his knowledge, only that he needed to acquire it to graduate. He failed to take his knowledge for a test drive by participating in different co-ops or internships, allowing him to explore different career options. Jim ended up graduating with a “C” average, which limited his career choices after graduation.

Jim then began trying out careers beginning with the financial industries and leading to retail management, where he found his niche. He learned to lead others, execute creative merchandising, and manage expenses. He found an application for his knowledge and focus for the passion and work ethic he had developed. This combination of purpose and passion put him on the corporate ladder leading him to a position of training other managers to operate high volume retail operations producing sales of over $60 million annually.

Jim was experiencing professional and financial success, but still lacked personal gratification. In talking through his situation with his wife, he realized the most rewarding part of his job was helping others succeed. Jim, at 39 with the support of his family, decided to leave his job go back to school to be a middle/high school teacher.

Jim became a successful teacher in a small school. To improve his skills as an educator he completed his master’s degree, completing classes in the evenings and weekends. Soon he had an opportunity to work at a university, working with a team to create unique hands-on programs for K – 12 students that helped them discover their interests and talents.

Jim work at the university with freshmen began to bring back memories of his early challenges in college. He found students today suffered the same anxiety of how to apply their knowledge. This led him to return to school to pursue his doctorate in studying college freshmen and their experiences. Jim’s goal was to develop programs that would help freshmen understand how they were going to use the knowledge they were struggling so hard to acquire.

The moral of this story is that the true value of knowledge is decided upon by those that possess it. Successful educational institutions must focus not only on delivering knowledge to students, but ensuring each student explores ways to apply that information or skills that are valuable to each of them.