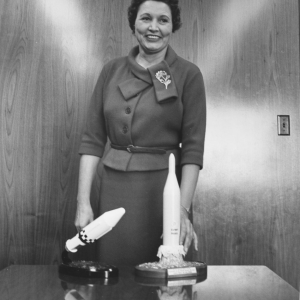 Mary Golda Ross stands smiling before a table with two models of spacecraft she worked to design. Image source: https://sandiegoairandspace.org/exhibits/online-exhibit-page/mary-golda-ross 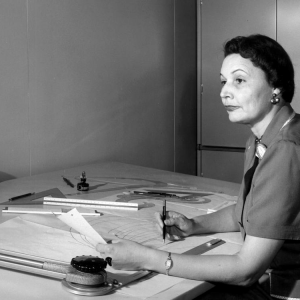 A painting depicting Ross wearing a red dress and pearls in front of a lake reflecting the starry sky above and pine trees. She is gesturing to a spacecraft in the sky. A red and white seven-pointed star at the top of the painting represents the Cherokee Nation. Image source: https://www.smithsonianmag.com/smithsonian-institution/little-known-math-genius-helped-america-reach-stars-180962700/ 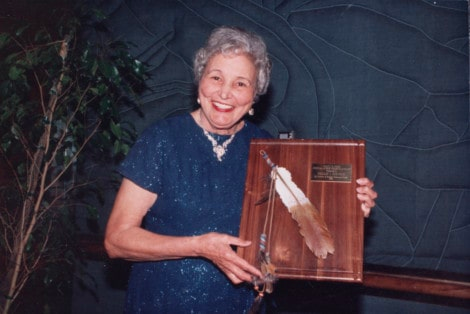 A Google Doodle illustration shows Ross in a green dress and pearls smiling at the center of a seven pointed orange, yellow, green, and white star. At the sides draft drawings of a spacecraft are present in front of the earth and space. Image Source: Google, https://www.google.com/doodles/mary-g-ross-110th-birthday

The Hidden Figures, whose work literally rocketed the United States to prominence in the space race of the 1960s, have recently been brought to light through books, blogs, and a movie.

Less well-known is Mary Golda Ross, a member of the Cherokee Nation who worked for the Lockheed Corporation and later NASA (and literally wrote the book on space flight) well before the Hidden Figures arrived.

Ross was born in 1908 in Oklahoma on the Cherokee Nation, and attended school in the Cherokee capital of Tahlequah where she excelled in mathematics and science, stating “Math was more fun than anything else. It was always a game to me.”

Mary was the great granddaughter of Principal Chief of the Cherokee Nation, ᎫᏫᏍᎫᏫ (or guwisguwi, meaning Mysterious Little White Bird), who was also known by the name John Ross. She was proud of her Native American heritage, which included an equal education for males and females.

At 20, she received her bachelor’s degree in mathematics from Northeastern State Teachers’ College and used her training to teach STEM in rural areas. While teaching, Ross took classes during the summer at what is now the University of Northern Colorado and earned a master’s degree in mathematics in 1938 after taking “every astronomy class they had.”

After 14 years of teaching, Ross sought to help the ongoing war effort and moved to California in 1941 to pursue new endeavors. The Lockheed Corporation (now Lockheed Martin), working frantically to develop new aircraft during World War II, hired Ross as a founding member and research assistant in the Advanced Development Projects group. Ross was tasked with calculating the effects of pressure and high speeds on an experimental plane, which would become the P-38 Lightning–the first plane to top 400 mph in flight.

After the war, Ross was not only kept on staff by Lockheed, but also sent to UCLA to acquire her professional engineer certification. With this title, she became the first known Native American female engineer in 1949 at the age of 41. As the space race was in its early infancy, Ross’ new certification allowed her to work on projects close to her heart: space flight. She began working on ballistic missile projects at Lockheed, then defense systems. She was selected as a founding member of “Skunk Works” at Lockheed, a classified group working on space flight as well as experimental aircraft. Ross’ contributions and calculations would later be an essential part of the Apollo space program. In addition, Ross was an author on the NASA Planetary Flight Handbook Volume III, which laid out constants, graphs, and speeds to facilitate round-trip travel to Venus and Mars. Though much of Ross’ work still remains classified, the full text of the Planetary Flight Handbook is now available through open-access on NASA’s website.

Mary Golda Ross retired in 1973, and became an advocate for and a voice of women and girls in STEM. She helped found the Society of Women Engineers (SWE) chapter in Los Angeles, traveled to deliver lectures, and worked to advance the newly founded American Indian Science and Engineering Society.

Ross was also instrumental in the creation of Smithsonian’s National Museum of the American Indian (NMAI) and was able to attend the opening of the museum in 2004, wearing a traditional Cherokee Tear dress (rhymes with bear) made by her niece. Mary Golda Ross passed away in 2008, leaving a substantial endowment for the NMAI to continue to preserve the history of Native Americans.

Ross continues to inspire new generations of mathematicians, engineers, and scientists. For her 110th birthday in 2018, she was the featured Google Doodle, and in 2019 she was featured on the Native American dollar coin (which was designed by an illustrator with Michigan ties, Emily Damstra, a University of Michigan graduate).

In 1961, Ross was asked if she would like to one day take a shuttle flight. Her reply, spoken like a true engineer, was simply “I’d rather stay down here and analyze the data.”