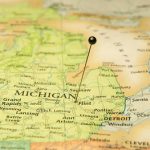 Michigan Tech was mentioned in an interview with Dr. Mona Hanna-Attisha, the pediatrician from Flint, Michigan who proved children in that city were exposed to lead in tap water. Hanna-Attisha describes an automobile accident she survived as a small child while her father was a postdoc at Michigan Tech.

She was interviewed on Public Radio’s Fresh Air with Terry Gross. A transcript of the show is available at Tri States Radio, WYPR, wesa.fm and several other public radio stations and websites.