Christina Lehman, Kinesiology and Physiology: Congratulations to Andrew Chapp for receiving a Predoctoral Fellowship from the American Heart Association. Andrew is a Biological Sciences PhD student working in Dr. Qinghui Chen’s electrophisyiology lab.  Andrew will continue to work in Dr. Chen’s lab focusing on a project titled, “Acetate as an Active Metabolite of Ethanol: Neural and Cardiovascular Implications.”

Andrew recently published a portion of his ethanol research in the American Journal of Physiology-Heart and Circulatory Physiology and has given several oral presentations pertaining to the effects of acetate on neuronal excitability.  The project Andrew has proposed is expected to have a positive impact on providing insight into the neuronal mechanisms of an alcohol associated hypertension and stroke. Additionally, this proposed study will provide not only a known cellular mechanism for pharmacological intervention of alcohol induced hypertension, but also broader implications to future studies in the alcohol research community related to acetate on learning/memory, motor control, and addiction/depression.

More information on Dr. Chen’s research can be found on his lab page. 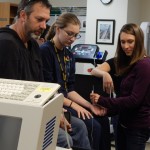 Here are a few pictures taken in the Department during the University’s open house last weekend, 26 September 2015. 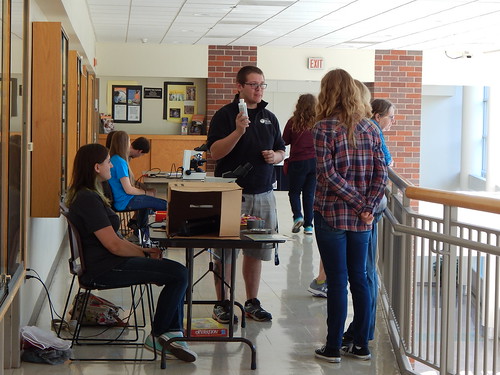 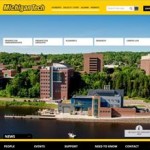 For the next several days the University’s home page has an areal view of campus. Prominently shown in the shot are several facilities that Biological Sciences uses for research and instruction including:

You’ll also notice at the bottom of the photo the University’s research vessel the SV Polar; Dr. Marcarelli just happens to be on the vessel when this shot was taken, working on her collaborative water millfoil invasive species project.

For more about new faculty, see the PowerPoint slides presented at the New Faculty Orientation.

Ebenezer Tumban, PhD
Ebenezer Tumban joins the Department of Biological Sciences as an assistant professor. Tumban comes to Michigan Tech from the University of New Mexico.

Tumban has done research with virus-like particles to try to increase the immunogenicity of less immunogenic human papilloma virus (HPV) antigens. He has developed two candidate vaccines for prevention of HPV.

What is it?The MSU College of Human Medicine (CHM) has partnered with Michigan Technological University to provide early assurance of medical school admission and enriched experiences for undergraduate students interested in becoming physicians in an underserved region or with an underserved population.

Professor Emeritus of Biological Sciences Ken Kraft passed away on Jan. 12 at his Chassell Township home.

Kraft’s research was in invertebrate ecology, particularly in aquatic environments, and some of his work was used by the Army Corps of Engineers and Cleveland-Cliffs (now Cliffs Resources) in their environmental studies.

“He was well respected in his fields of study—entomology and aquatic environmental studies,” said Professor Emeritus Bob Keen. “He was also a mentor to a number of graduate students, including some who went on to attain PhDs and did very well.”

Professor Emerita Janice Glime recalled him as a “rather gentle, quiet person. You could always count on him. He was in his office from 9 to 5, when he wasn’t in class. His lab and library were adjacent to his office, and he was always there.”

“He was a very soft spoken gentleman who had a great smile,” said long-time staff member Pat Asselin. “He was a pleasure to know and work with.”

Kraft’s career at Michigan Tech actually began in forestry, where he was taught zoology, and he joined the biological sciences department when it was formed in 1962. He eventually rejoined the forestry faculty before retiring.

“He was the nicest guy I knew,” said Professor Emeritus Jim Spain, also of biological sciences. “We did work together on Lake Superior. We once took a boat and a student to Rabbit Island to find a heron rookery. Well, we searched all over and couldn’t find it. We went back to the boat to discover that we had parked it right underneath the rookery!”

Kraft was instrumental in setting up Tech’s first research program on Lake Superior through his connections with faculty at Minnesota-Duluth.

Spain also credited Kraft with creating the “rock pasty”—pebbles surrounded by a cloth—that was lowered into the lake and became a home for invertebrates that they were studying. “We published that one,” Spain said.

Spain said Kraft also led a seminar where he had everyone, including the faculty, read “Silent Spring” by Rachel Carson. “We grew our enrollment exponentially at the time, because of the environmental movement,” Spain said.

Kraft was one of the founders of the Unitarian Universalist Fellowship in Houghton, according to fellow church member Harriet King.

“He served as president, did our newsletters, and always brought fresh eggs from his farm,” King remembered. “He would have church and community members out to his farm to see the orchards, gardens, and chickens.”

Kraft received his PhD in Entomology and Botany from the University of Minnesota. He taught at Minnesota, Moorhead State and Bemidji State before coming to Tech. He retired in 1996 after 34 years of service.

Kraft was preceded in death by his wife, Susie, in 2009 and is survived by two daughters, Jennifer Turner and Karen Miller, and grandchildren, Jessica Turner and Alexander and Andrew Miller. The O’Neill-Dennis Funeral Home in Hancock is in charge of arrangements. A summer memorial service is planned. 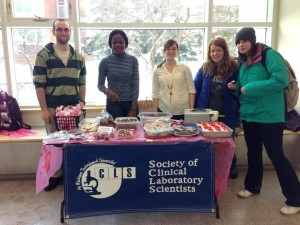 Students from the Society of Clinical Laboratory Sciences pose with their wonderful backed goods. What does it take to come to Michigan Tech? For me it took begging, nagging, complaining, and the occasional case of the Teary Eye Syndrome. It all started when I came to the U.P. for the first time, attending the SYP Women in Engineering Program. It was love at first, “Oh yah troll, don’t chyah know about dem pasties?” I am uncertain as to whether it was the gorgeous weather, the natural scenery, or the camp counselors that caught my attention and put Michigan Tech at the top of my list of colleges. My admiration for the campus only increased the next time I visited the campus for the Leading Scholars Competition. There is nothing quite like being in a room of 40 talented students who have the will and the potential to make a difference. Michigan Tech made the top of my college list by a landslide!

My parents disliked the idea of going 600 miles away to a “tiny, engineering school.” They just didn’t know the magic of being a Husky—the adventure, the innovation, the ability to find something you love, do it, and be recognized as an individual. So, of course, I was signed up to attend orientation at U of M. I already had a roommate, and a full schedule of classes (This is where the crying part came in). I wasn’t upset simply because I didn’t get what I want, or because I feared I wouldn’t accomplish anything there, but there was no beating-heart-full-of-excitement rush to go there. Perhaps there doesn’t need to be this kind of enthusiasm when picking out a college, but since there was, it was something I could not let go. At this point I knew the friendships that I made both times visiting Michigan Tech would last a lifetime and that my heart was at Tech. Thankfully I got my way! We subsequently packed the car to the brim for my long journey ahead of me, and it turned out that the journey has been far longer than a 10 hour car ride north.

By embodying myself with passion and immersing myself in campus involvement, I have become a part of something much greater than I could have imagined. Before the first day of classes, I already found a place for me—the electron microscope facility! I had taken a course in the subject and after following one of the workers around every week, they decided to just hire me. My job is more of an opportunity than a task as I have the privilege of preparing and examining samples from every single department on campus. The time I spend training countless graduate students, post-docs, other undergraduates, and even professors has enhanced my maturity, responsibility, and curiosity. The best part about my job is getting to interact and learn about the details of projects and labs that I would not have even heard about, had it not been for this experience. If this alone didn’t drive my interest for research, I don’t know what did. I was lucky enough to stay on campus for the past two summers, working, doing a summer research fellowship and taking classes.

Aside from undergraduate research, I love to volunteer! My parents thought that Michigan Tech was the last place I should go as a pre-medical student. It hasn’t been hard to prove them wrong. Once a week I go to Portage Health to volunteer in the dialysis unit and shadow a physician. This is the absolute best day of my week! Moreover, I also get to help people firsthand as a medical first responder on the Michigan Tech EMS team. Both of these experiences have opened my eyes to rural medicine and further driven my passion and goals in becoming a physician. Lastly, I am honored to also be involved with the Executive Board of the Honors Institute, the Pre-Health Association at Tech, and the Phi Sigma Biological Honors Society.

The magic is everywhere; everybody knows the feeling of being far away from Tech and seeing someone wearing Michigan Tech apparel, seeing a Husky license plate, or overhearing somebody talking about this wonderful place. It doesn’t happen every day, but each time it happens to me, I feel a surge of Husky Spirit! I start telling each and every person about my experiences. It is this spirit that the Huskies have, especially for WINTER CARNIVAL! Watch out, because superheroes, villains, and the like are going to take over campus, and I cannot wait to see what this year’s Winter Carnival has in store for all of us here at snowy MTU! Although this is my last Winter Carnival as a student, it will certainly not be my last Winter Carnival as a Husky. It is, without a doubt, a privilege to represent the Air Force ROTC as their 2013 Queens Candidate. I would also like to give a special thanks to the Blue Key Honors Society for hosting Winter Carnival and to Wells Fargo for being my merchant sponsor. Bring on the powers in these frozen hours!