Digital Journal reported on a $4 million U.S. Department of Energy grant to LanzaTech to design and plan a demonstration-scale facility using industrial off gases to produce 3M gallons/year of low carbon jet and diesel fuels. Michigan Tech’s Sustainable Futures Institute will help them evaluate the environmental footprint of the fuel produced.

CHICAGO, IL–(Marketwired – Dec 30, 2016) – Carbon recycling company, LanzaTech, has been selected by the Department of Energy’s Bioenergy Technologies Office (BETO) to receive a $4M award to design and plan a demonstration-scale facility using industrial off gases to produce 3M gallons/year of low carbon jet and diesel fuels.

The Michigan Tech Sustainable Futures Institute is excited to continue our relationship with LanzaTech, helping them innovate and develop products that meet environmental goals in addition to technical and economic targets.

McGee is a second-year chemical engineering student whose family has lived in the Upper Peninsula for three generations. “With my degree, I will travel the world, using my knowledge to better companies’ environmental footprint,” he says.

The Annexstad Family Foundation was established in 2000 to help aspiring college students. “We have long believed that young people are our future,” say Cathy and Al Annexstad. “By giving students who are the brightest of the bright the opportunity for a college diploma, we are giving our country a successful future.”

The Presidential Council of Alumnae at Michigan Tech held a panel discussion in Chem Sci 101 on September 22, 2016. Alumnae gave presentations about their careers. 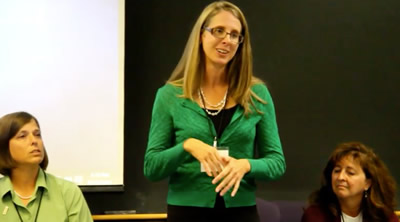 Dr. John Patton was presented with his award during a wine and cheese reception on September 21, 2016. The Honorary Alumnus/a Award was for:

The reception was held on the first floor of the Chem Sci Building, near the Unit Operations Laboratory Window. Dr. Patton gave a speech, “Advice for a successful undergraduate career.”

The Honorary Alumni Award will be presented to John Patton, former Professor of Chemical Engineering 1968-77 of El Paso, Texas when he is on campus this fall.

The Fort Worth, Texas native, earned his bachelor’s, masters and PhD in Chemical Engineering from Oklahoma State University. He joined Exxon USA as a section head responsible for research on enhanced petroleum operations in 1959. In 1968 he brought his extensive process design and operations experience to Michigan Tech as professor of Chemical Engineering plant design and economics. Within three years his design students started receiving national recognition from AIChE. During his tenure at Michigan Tech his students twice won the national AIChE Design Contest for undergraduates. He also initiated a viable graduate program and elevated the quality of the undergraduate curriculum to the point of its receiving full national accreditation.

Shonnard is an Invited Panelist

David Shonnard (Robbins Chair, ChE) and Robert Handler (SFI) have been invited as panelists in a breakout session at the Alternative Aviation Fuel Workshop hosted by the U.S. Department of Energy (DOE) Bioenergy Technologies Office (BETO) in Macon, Georgia September 14-15, 2016.

Handler will attend and join other experts from government, industry and academia to promote the environmental sustainability of biofuels in the aviation industry. Further information can be obtained from Handler at 7-3612 or rhandler@mtu.edu.

Suphitsara Yingyuen, whose nickname is Mae, and Sorawit “Pum” Limtasiri are materials engineering undergrad students from Kasetsart University in Bangkok who are at Michigan Tech for a two- month summer internship.

The internships started after Jennifer Donovan, Tech’s director of news and media relations, traveled to Thailand as a Fulbright communications specialist at Kasetsart University.

The interns’ advisor, Timothy Eisele, assistant professor of chemical engineering says, “Overall, I am very happy with both of them. They are conscientious workers who want to have a good understanding of what they are doing, and they work well with my other students.”

Wen Zhou (ChE/SFI) is the principal investigator on a project that has received a $310,716 research and development grant from the National Science Foundation.

David Shonnard (ChE) is the Co-PI on the project “SusChEM: Integrated Studies on Interactions between Lignocellulosic Fine Structure and Hydrolytic Enzymes toward Efficient Hydrolysis.” This is a three-year project.

The conference was hosted by Nanjing Tech University and the State Key Laboratory of Materials-Oriented Chemical Engineering.

Unscripted: To Purify a Virus

Virus hydrophobicity is the focus of research by Caryn Heldt, an associate professor of chemical engineering, who won a National Science Foundation (NSF) Early Career Award grant. Heldt’s CAREER Award will help her explore a process that causes viruses to clump, making them easier to remove.

Our focus for purification is for improved vaccine manufacturing. Reducing cost could increase adaption around the world.

Read more and watch the video at Unscripted, by Allison Mills.

Kawatra is a Chemical Engineering Professor You Should Know

The list is comprised of some the outstanding professors and Universities in the field. Online Engineering Programs wanted to recognize some of their great contributions to academia on their blog as well as the rise in online education.

Kawatra has worked at Michigan Tech since 1977, where his research interests include iron and steel making, as well as particle technology. He is also the editor in chief for the Minerals & Metallurgical Processing Journal and the Mineral Processing & Extractive Metallurgy Review Journal.