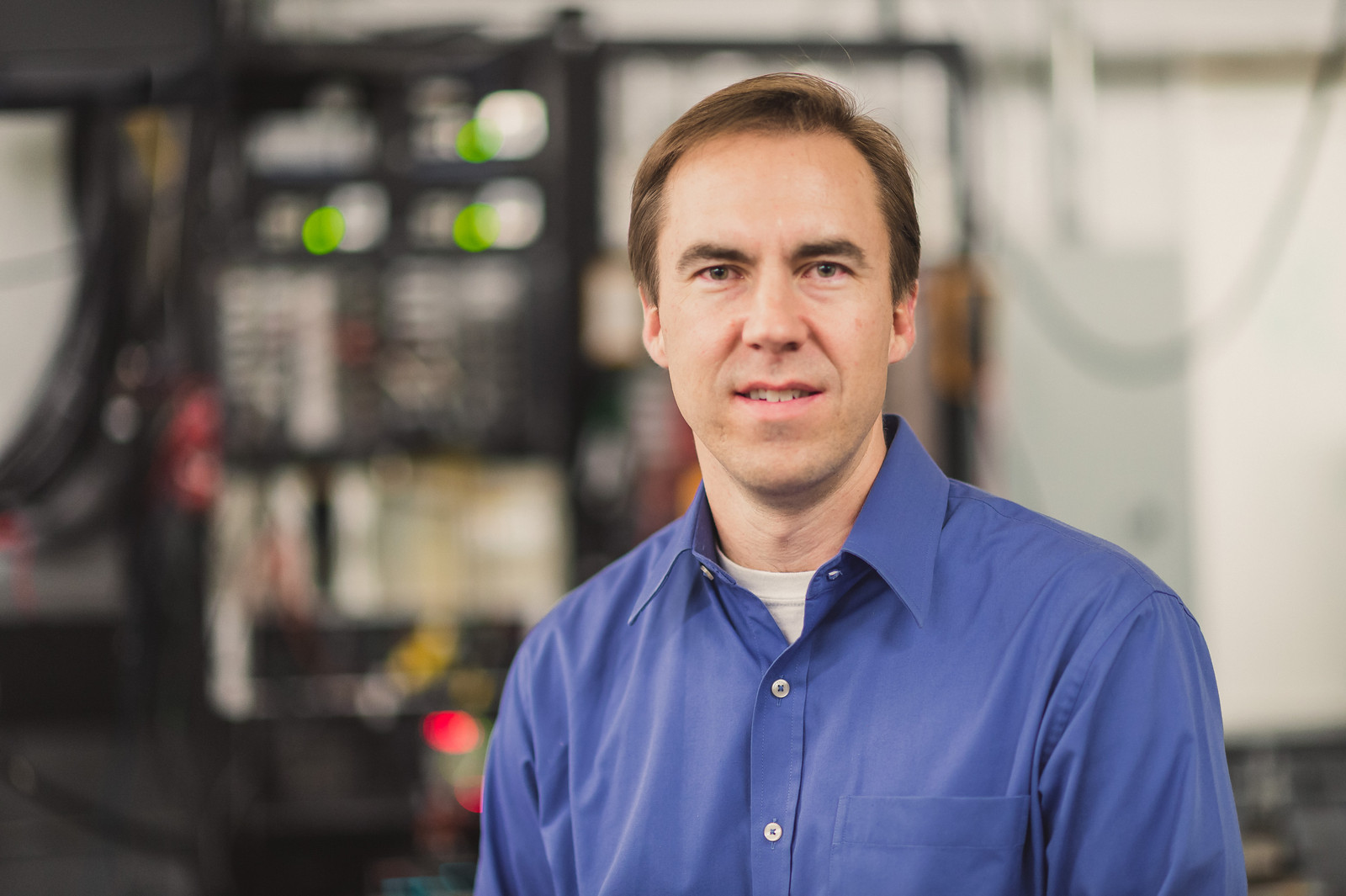 I have always been interested in building things—long before I knew that was called “engineering.” I don’t recall when I became fascinated with space but it was at a very early age. I have embarrassing photos of me dressed as an astronaut for Halloween and I may still even have an adult-sized astronaut costume somewhere in my closet—not saying.
The desire to explore space is what drives me. Very early in my studies I realized that the biggest impediment to space exploration is propulsion. Space is just so big it’s hard to get anywhere. So I dedicated my professional life to developing new space propulsion technologies. There is other life in our solar system. That is a declarative statement. It’s time that we find it. The moons of Jupiter and Saturn hold great promise and I’m determined to see proof in my lifetime.
I was born and raised just north of Houghton (yes, there actually is some habitable environment north of Houghton). I received my BS, MS, and PhD from the University of Michigan. I spent time traveling around the country working at NASA in Houston, NIST in Boulder, and realized that all of my personal hobbies and proclivities were centered around the geography and climate of northern Michigan. I returned in 2000 and began my career as a professor at MTU. I enjoy fishing, boating, hockey, and spent more than 15 years running my dogsled team all over the Keweenaw Peninsula. –Brad King, Henes Endowed Professor in Space Systems, MTU Aerospace Enterprise Advisor #mtuhumans Sometimes my name tag says Taylor 2.0. It’s a running joke with one of my coworkers; basically, we were arguing about who is better at their jobs, and I said, “You’re Taylor and I’m better, so I’m Taylor 2.0 now.” So that’s been my name tag ever since. It’s a fun joke at work and everyone says, “You don’t look like a Taylor.” And I say, “I don’t look like Taylor, but I’m Taylor 2.0, so that’s a different person.”

Hockey has definitely changed me as a person. I used to be so introverted and keep to myself, not have many friends, not talk to people. Hockey opened everything for me.

I’m from Rajasthan, India. Cricket is a religion in India and that’s what I used to play, amongst other sports, but when I came to Michigan Tech, I watched my first hockey game in October 2016 and I was like, “Okay, this game is something.” So I slowly started to follow the game, then I learned about Mitch’s Misfits and I joined them, and that just pushed me into hockey. I see my parents in Hockey Coach Joe Shawhan and his wife, Lauralee. Since we met, they’ve never let me feel like I am away from home. They have never thought of me anything short of a son and they always tell me that I am family. I probably can’t repay all the love I get from them.

I’ve been home twice since coming here, the summer after my freshman year and last fall for my sister’s wedding. My mom misses me a lot, she always texts me and calls me, “Please come home, please come home.” My dad is pretty opposite, he’s like, “Why do you want to come back home? Enjoy your life. Go visit different states, go explore the US. Just explore.”

Snow played a big factor because I had never seen snow in my life. Rajasthan is a really hot place and I was like, “Yeah, I need snow. I should see snow.” But when I came, I was like, “Oh, this is snow. This is the UP snow.” My surroundings went from like 45-50 degrees Celsius to like -10 to -15 degrees. It was fun adapting to it. And I had never been to the US before I applied to college, so the first time I came to the US was coming to start school. There’s only three things that force me to stay here: good education, so-good people, and hockey. You take one of those things out I might survive. If you take hockey out, I will definitely not survive. I’m super into rocketry. In high school, I was the captain of one of the rocket teams and was on the team for three years. Actually, Mr. Ratza, our advisor, also recommended I do the women in engineering Summer Youth Program (SYP), so I attribute a lot to him. I came for SYP the summer into my senior year. Michigan Tech is the only school I applied to. I’m studying mechanical engineering, I’m outreach coordinator of the Keweenaw Rocket Range student organization, and I’m staying over the summer to take classes and be a SYP weekend counselor. In the fall, I’ll be an orientation team leader. I’m a very sociable person, so it’s not hard for me to be outgoing. Just genuine talking—I’m good at that.

The way I got the job (as outreach coordinator) was by raising my hand at the info session. No one else raised their hand. I’m actually really enjoying it. We’re going to New Mexico for a competition in June. Even though I’m really heavy into rocketry and this leadership stuff, I think it’s important to not get focused solely on those things, but rather, be flexible and versatile. I’m also interested in videography. Because mechanical engineering is so broad, I don’t want to specialize myself in the beginning of my college career, I’d rather be open and see where it takes me, and if rocketry doesn’t end up being my career, I can just make it a hobby because I like it; so that’s my advice—flexibility. I was born in England and raised in Canada, but I’m excited to stay and work in the Midwest. I might not play volleyball again, but I get to go out in the world and be a part of a whole new team as a mechanical engineer for Yanfeng Automotive Interiors. A team isn’t just what you see on the court. Sport is a lot more than running up and down or jumping. It’s sacrifice. We’ve been 0 and 20 and we’ve experienced a 10-game winning streak. Even just a taste of success gets you through the droughts. My coaches provided a framework for what kind of athlete, and what kind of person I want to be. The world is ready for strong, athletic female leaders.