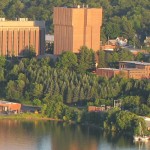 Michigan Tech Mobile Lab Helps Engineers Design for Human Comfort: Michigan Tech’s mobile lab will travel to Novi, Mich., on Oct. 28 to serve as the site for a one-day workshop on the use of specially designed human manikins and software to measure air velocity, temperature, radiant heat flux and relative humidity in vehicles. Engineers have been invited to participate in the “Manikinalysis” workshop hosted by Michigan Tech, Thermetrics and ThermoAnalytics. Thermetrics makes the HVAC Manikin and ThermoAnalytics produces the human thermal software.

Michigan Tech alumnus Gregory Hardy has received the Steve Thorne Leadership Award, funded by the GE African American Forum. The award recognizes outstanding leadership in the National Society of Black Engineers.
Hardy graduated with a BS in mechanical engineering from Michigan Tech and is currently a mechanical science and engineering graduate student at the University of Illinois at Urbana-Champaign. Regarding the award, Hardy told the NSBE, “This fuels my fire to do more and inspire others to do the same.”

Nina Mahmoudian (MEEM) has received a $57,708 grant from the Office of Naval Research for her research project titled, “Toward Undersea Persistence.”

Channel 2, KTVN in Reno, Nevada reported on SAE International’s expansion of its SAE John Johnson Award for Outstanding Research in Diesel Engines to honor individual leaders in the field. Established in 2008, the award traditionally recognized authors of an SAE International outstanding technical paper that addresses research advancements in diesel engines regarding efficiency and low emissions achieved by innovative experimental and modeling research of the engine, fuel and/or after treatment systems.
This prestigious award honors John H. Johnson, a Presidential Professor with Tech’s Department of Mechanical Engineering Mechanics. Read the story.

Dr. Hussein Zbib received the Voiland College of Engineering and Architecture’s 2015 Anjan Bose Outstanding Researcher Award. Professor Hussein earned his BSME, MSME, and PhD in ME-EM all from MIchigan Tech and is a member of our EAB. He is a professor and former head of the School of Mechanical and Materials Engineering at Washington State University.

Diesel Engine Aftertreatment Consortium Partner Meeting: The Department of Mechanical Engineering – Engineering Mechanics will host a Diesel Engine Aftertreatment Consortium Partner meeting September 16 in MEEM 1021. Industrial partner representatives from Cummins, John Deere, Daimler-Detroit, Corning, Johnson Matthey and Tenneco will be on campus all day to review research progress during the second year of three year consortium. The focus of the consortium is on experimental and modeling research of advanced diesel after treatment systems and is a part of the APS Labs. John Johnson, Jeff Naber and Gordon Parker are the faculty associated with the Consortium.

Andrew Barnard, (MEEM, GLRC), is the principal investigator and Guy Meadows (GLRC) and Nina Mahmoudian (MEEM) are co-principal investigators on a project that received a $599,620 grant from the U.S. Department of Defense-Office of Naval Research. The project is, “Developing a Talent Pipeline: Inspiring Future Naval Engineers and Scientists Using Real-World Project Based Instruction.” This is potentially a three-year project.

Michigan Tech fourth-year mechanical engineering major Reagan May (Depere, Wis.) was featured in the article, “The Kulwicki Driver Development Program Gives Grass Roots Racers a Shot at the Big Time,” by Rod Fisher. The article appeared in the online magazine Circle Track, published by Hot Rod Network. The article is an in-depth look at May, who is in her second season as a race driver in the TUNDRA Super Late Model Stock Car Series. May is one of just seven drivers nationally, and the only woman, selected for the Kulwicki Driver Development Program.

A website called College Recruiter highlighted Professor Greg Odegard (ME-EM) commenting on the need for diversity in the engineering workplace.

GoodCall.com, a consumer news website, published an article about the economic value of a master’s degree, quoting Chair Bill Predebon (ME-EM) on why mechanical engineers with a master’s degree earn more than those with bachelor’s degrees.

Michigan Tech researchers who are using a 3-D printer to regenerate nerve tissue were mentioned in a Fortune online article on the 3-D bioprinter.

Gregory Odegard, professor, associate chair and director of undergraduate studies in the Department of Mechanical Engineering-Engineering Mechanics, was interviewed by ScienceAroundMichigan, a science news website, about Michigan Tech being selected as one of five universities in the country to participate in a National Science Foundation engineering education diversity project.

Corp published an article on the future of the high-tech jobs market in Michigan, quoting Jim Baker, executive director of Innovation and Industry Engagement, and Steve Patchin, director of Career Services. The article also features several photos of Michigan Tech students and interns.

The National Science Foundation tweeted that Assistant Professor Nina Mahmoudian (ME-EM) is a “rock star.” The tweet referred to her winning both an NSF Career Award and an Office of Naval Research Young Investigator Program award this year. See the tweet.

Tech Century, a science and technology news website published by the Engineering Society of Detroit, reported on a visit by ESD executives to Michigan Tech and plans to establish a student chapter of the ESD at Michigan Tech.

Principal Investigator Ezra Bar-Ziv (MEEM) has received a research and development grant of $250,016 from the U.S. Endowment for Forestry and Communities for the project Demonstration of Densification of Biocoal Prepared from Low Lignin Woods.

Seong-Young Lee (MEEM) has received a $5,000 grant for other sponsored activities from the National Science Foundation. The funding sponsored his travel to attend the 3rd Laser Ignition Conference at Argonne National Laboratory in Lemont, IL in April.

Technology Century, a science and technology news service published by the Engineering Society of Detroit, ran an article on Associate Professor Reza Shahbazian-Yassar’s (ME-EM) work on improving the performance of lithium ion batteries. R&D Magazine which provides news and information for the research and development community published an article about the same research.

The Michigan Tech SAE Formula Car Team finished 23rd out of 110 teams at the 2015 Society of Automotive Engineers (SAE) National Competition at the Michigan International Speedway, Brooklyn, MI, May 13-16, 2015. They took 25th in Acceleration, 26th in Endurance, 31st in Design, and 31st in Business Presentation. They also won the 2015 Mac-Lean Fog Fastening Challenge earning them a trophy and $1000.
The faculty advisor is Dr. Jim DeClerck.

Nina Mahmoudian, (ME-EM) has received a CAREER Award from the National Science Foundation. The research grant is for the project: Autonomous Underwater Power Distribution System for Continuous Operation. The $98,337 she received is for the first year of a five-year project that could total $500,442.

Gordon Parker, the John and Cathi Drake Chair Professor in Mechanical Engineering-Engineering Mechanics, has been elected a Fellow of the Society of Automotive Engineers (SAE). Parker is being honored as a recognized international leader in control system design research in a variety of mobility-related applications, from diesel engine exhaust aftertreatment to satellite formation flying. He will be honored during the SAE 2014 World Congress and Exhibition in Detroit on April 20, 2015.