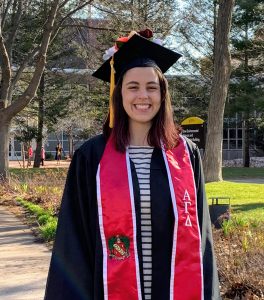 By the end of my third year however I was really inspired by my time with the conservation corps and I wanted to learn more about natural resources, so I once again switched, this time into biological sciences with a concentration in ecology. Completing my ecology concentration classes were by far the best preparation for medical school and definitely allowed me to develop a different way of thinking about interactions, whether it’s a wetland or an organ system.

I am currently a student at Michigan State’s College of Osteopathic Medicine. One of my favorite primary care providers was a Doctor of Osteopathic Medicine(DO), and after shadowing a DO I found that my personality fits more with the osteopathic providers compared to allopathic. I like the DO philosophy and its holistic view of people. I was also interested in having the extra tool of Osteopathic Manipulative Medicine to treat patients. Having OMM classes now in the fall semester is definitely a nice break from traditional classwork and feels great to have classmates practice techniques on me after sitting and studying for long hours.

Knowing who to know is everything as a pre-med. This includes advisors, upperclassmen, classmates and professors. No one becomes a doctor on their own. If someone was considering pre-med my first step of advice would be to contact Nicole Seigneurie, the pre-med advisor. She is incredibly helpful and will do her best to help you succeed. After that, it would be to network with those around you because you never know what opportunities will come from it. For university resources, I utilized learning centers often, took research opportunities that were available to me, and shadowed at local hospitals.

My favorite extracurricular activity that I participated in during my time at MTU was with MTU Emergency Medical Services. Everyone in the organization is dedicated to growth, learning, and genuinely cares about others. It gave me a great introduction to medicine. Other extra circulars that I enjoyed while being at Michigan Tech was being a member of Alpha Gamma Delta, a Girl Scout Troop Leader, a resident assistant, biology learning center coach, research, and working various jobs across campus. The best experience that I could have sought was doing an AmeriCorps service term and taking a break from school to investigate my other interests and understand what it means to volunteer and contribute to a community.

I would say to financially plan ahead, applying to medical schools is expensive and a lot of people have to do it more than once before they are successful. That being said, as soon as you’re accepted, find out information on as many scholarships as possible and don’t wait to apply for them. I learned about the National Health Service Corps scholarship, which pays tuition and stipend in exchange for working primary care in underserved areas from a doctor my mom was working with. I applied for it and with lots of help from letter writers, was awarded it. I would highly encourage anyone considering primary care to apply if it aligns with your career goals.

As far as how to pick programs, apply for programs whose mission statement you identify with and can see yourself being passionate about. Mission statements tell you a lot about a school’s priority and what kind of providers they want to graduate. If you are considering medical school I would really encourage people to look at both routes, MD or DO, and investigate what each one really means before choosing. DO has a lot to offer and will be competing for residency spots with MD’s now that the residency merger has taken place. I’m really glad that I was exposed to DO and think that DO programs have a lot of great things to offer their students.