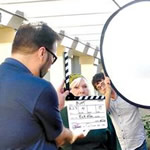 Mary Ann Beckwith, Professor Emeritus, announced her exhibit in Lansing in TechAlum Newsletter. The exhibit opening will be October 4, 2013, 7-9 pm. The exhibit runs until November 8.

Beckwith would love to see Tech alums there.

Read more at From the Email Bag in TechAlum Newsletter.

Anne Beffel is the New Chair of VPA

The College of Sciences and Arts has welcomed three new department chairs who are beginning their careers at Michigan Tech this fall. Cary Chabalowski joins the Department of Chemistry as chair and professor of practice. Anne Beffel is chair of the Department of Visual and Performing Arts (VPA) and Chandrashekhar Joshi chairs the Department of Biological Sciences.

Beffel joins Michigan Tech from Syracuse University’s College of Visual and Performing Arts, where she has taught since 2000. She defines herself as a “time artist” which she says means that she is deeply interested in connecting art and social context in time, using all forms and media. She replaces Roger Held, who is completing seven years as chair of VPA.

Beffel says, “As our jazz musician Associate Professor Mike Irish says, ‘Art is everywhere.’ Everything and anything we do can be approached with creativity. Each moment we spend perceiving or responding to our world is a creative act. VPA is here to help students hone their abilities to be creative in all situations.

“Amazing faculty, staff and students—this is what struck me when I first visited Tech. Creativity abounds in the Department of Visual and Performing Arts. Passion, enthusiasm and humor infuse the disciplines of music, sound, theater and visual art. The projects faculty lead, such as Assistant Professor Jared Anderson’s summer concert tour of the Balkans for students, faculty, staff and the community beyond Michigan Tech, offer a unique series of creative experiences grounded in both breadth of subject and depth of technical expertise.”

Announcing OPEN AUDITIONS for Tech Theatre’s production of Southern Nights:  Unsung Songs of the Southern Nightingale, one-act masterpieces by Tennessee Williams.  Each short play has a set of characters who discover, collectively, hope, harmony, power, and passion.  The cast calls for 9 men and 5 women.  Auditions will be held in Walker 210, on the Michigan Tech campus, Sunday, September 15 and Monday, September 16, from 7-10 pm. The audition will be comprised of informal theatre games and reading from the script.  Please arrive at 7:00 p.m. The production will be performed November 14-16.  Rehearsals begin the week of September 21.  Directed by Roger Held (rheld@mtu.edu)

HOW TO PREPARE FOR AUDITIONS:  Read the play and familiarize yourself with the scenes.  Scripts are available in the VPA office (Walker 209) and may be checked out for 24 hours.  All scripts must be returned to the VPA office by Friday, September 13, 4:00 p.m.  Show up before 7 pm on Sunday, September 15 OR Monday, September 16.  We will engage in some informal theatre games then move on to reading from the script!

Miss Simple.  Dorothy is attractive and untouchable.  She has passed through life without it leaving any marks.  Her hair is perfect; her make is perfect.  She does everything precisely, accurately, and never says or does anything controversial.  When aroused by the young man and his promise of living free, however, she leaps to action believing it will all be perfect. She speak formally and with restraint until she busts free.

Young Man.  He like the author very much believes one can cast aside convention and live for the moment and the self and do as he wishes to meet his various appetites.  Symbolically, he is a libertine and Dorothy his promising convert.  A smiling yarn spinning con man.

Mrs. Dull is.  She is the stuffed shirt elder who has wrapped herself in social insulations so she is never vulnerable or sexually liberated in any way.  She is ready to be offended and call the police.  She is suspicious of others.  Her speech is as tight as her other end.

The Policeman is the symbol of social control.  Seemingly amiable, he enjoys asserting his authority and threatening others.  He is just a nice guy until he warns Miss Simple about leaving town then he is capable of force.

Set in Boston, Policemen may be Irish.  Others speak Standard American English.

Talk to Me Like Rain and Let Me Listen

These two characters the woman and her male companion would be white trash if they were in the South rather than New York City.  The man, if not an alcoholic, drinks to turn off the failure that is his life.  He ditches his girl to party.  She longs to be alone somewhere nice, quiet, where people just accept you and leave you alone.  He wants the torment of life to go away. They take solace in quiet talk together that would be meaningless to any one else.  In a way, they just like anyone who just wants the bad stuff of life to just stop.  Talking together is as close as they get.

The play is set in a medieval mythical kingdom. The main character is the Queen of May.  She wears an ancient mask and can remove it to reveal her beauty and sensual powers.  Her court features: her poet who begins each line of his poems with the Pronoun I.  A courtier who does her biding and an impostor who is an assassin complete the on stage cast.  Outside the crowd is in revolt.  Yes, this is an absurdist play

An older looking man of powerful demeanor and an easy voice, a glib speaker.  He is invulnerable in his power.  It makes one uncomfortable to be in his presence as he uses his power for no good.  He feels entitled to do anything because he is special.

Young man, dependent on others for everything. He believes he can simply conform to all requests from everyone in power and thus stay safe.  He is trapped and has no way out.  Life is terrifying when you’re not alone or high on sex.