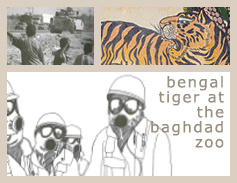 “Bengal Tiger at the Baghdad Zoo,” a play by Rajiv Joseph, explores how the lives of two American Marines and an Iraqi translator are forever changed by an encounter with a quick-witted tiger who haunts the streets of war-torn Baghdad attempting to find meaning, forgiveness and redemption amidst the city’s ruins.

“Bengal Tiger at the Baghdad Zoo” examines both the power and the perils of human nature.

From Tech Today, by Tech Theatre.

Tech Theatre Company to perform “Bengal Tiger at the Baghdad Zoo” Oct. 15-17 and 22-24 in McArdle Theater

The New York Times writes, “Set in the chaotic first days of the American invasion of Iraq, this boldly imagined, harrowing and surprisingly funny drama considers the long afterlife of violent acts, as well as the impenetrable mysteries of the afterlife itself.”

According to Director Roger Held, “While depicting a devastatingly cruel and venal world [the tiger] offers hope of redemption and meaningful life after a history of complacency and compliance. What we must do is not easy; we must find and risk being ourselves…”