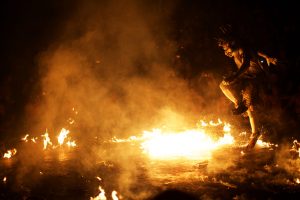 This year’s theme is “En Fuego!” — a concert featuring music that is imbued with heat. Mike Christianson, director of bands, will first lead each band individually, finishing with the two combining into a “megaband” of 120 musicians.

According to Christianson, “The music is by composers who hail from exotic climes such as Spain, Brazil, Mexico, Argentina, France, Germany and Saginaw.” Music will range from South American symphonies, Spanish jazz arrangements, Afro-Cuban and Latin music, and even a favorite by Stevie Wonder.

Highlights include Handel’s “Overture from Music for The Royal Fireworks,” “Mambo in F” arranged by Cico O’Farrill, “Cucurrucucu Paloma” with a guest performance by Jared Anderson-voice, “The Maids of Cadiz” featuring guest Aaron Christianson on trumpet and favorites “Don’t You Worry ‘Bout A Thing,” by Stevie Wonder, “Amparito Roca” and “Malaguena.”