THE Project Competition: Two School of Business and Economics Teams 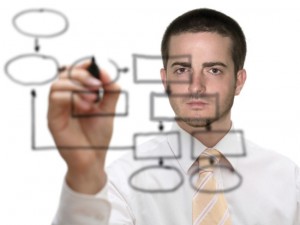 When people hear the word “manager”, they think of a supervisor or someone in charge of making a schedule. Images of Bill Lumburgh from Office Space talking about memos and TPS reports come to mind.

However, in recent years, Project Management has grown into an important profession and Michigan has begun to take notice. Spectrum Health, Steelcase, Amway, the Grand Rapids Business Journal and other local businesses have partnered with the Western Michigan chapter of The Project Management Institute (WMPMI) to host an intercollegiate project management competition simply known as THE Project 2012.

Eight teams from six colleges and universities compete for $10,000 in cash prizes and paid internships at major corporations in West Michigan. Dana M. Johnson, Professor of Operations and Supply Chain Management and Michigan Tech Champion, formed two team of four students each from the School of Business and Economics, Michigan Tech for the competition.

”This is a great opportunity for our students to apply what they learned in the project management course to a real-life situation. At the competition, students will not only be able to network with other teams, but gain valuable exposure to companies who are seeking to hire graduates through a reverse career fair.”

The student teams, along with their school, business, and PMP mentors, must create a project management plan for a business seeking B Corporation certification. B Corps permits and protects businesses in making social and environmental decisions. Instead of being accountable only to shareholders, B Corps businesses must also consider their impact on employees, their community, and the environment.

“B Corps certification allows a business to have a triple bottom line focus of profit, people and the environment,” Kelly Talsma, PMP, Vice President of Education at WMPMI, said.

The Project Management Institute recently released a study stating there were 90,000 job openings in the United States where businesses required or preferred PMP certification. Many colleges and universities have recognized this trend and have responded with several courses and degrees with a focus in Project Management.

THE Project 2012 wants to give students real-life business experience rather than a mere academic exercise. The winning team will have an opportunity to make their presentation in front of 500 business and academic leaders as well as members of WMPMI.

For more information on project management or WMPMI, go to www.wmpmi.org. To learn more about B Corporations, visit www.bcorporation.net.