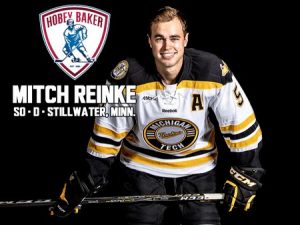 Reinke, a sophomore from Stillwater, Minnesota, is sixth in the country in assists amongst defensemen with 16, placing him second in the WCHA. He is currently tied for the team lead with 18 points. Reinke was named an alternate captain in only his second season with the Huskies and was recently named to the Great Lakes Invitational and Ice Vegas Invitational all-tournament teams.

Tech is 9-1-4 when Reinke records a point. He has four multi-point games this season with a goal and an assist in a 5-4 win over Alabama Huntsville on October 20 and a pair of assists in the Ice Breaker Championship win at Minnesota Duluth (Oct. 7), a 2-2 tie at Lake Superior State (Oct. 14), and in the Ice Vegas Semifinal win over No. 13 Boston College (Jan. 5).

Reinke also leads the Huskies with 43 blocked shots to ranked fifth in the WCHA and is second on the team, and ranked in the top 10 in the WCHA, with a plus-8.

Reinke was a Preseason All-WCHA Second Team selection by the media while also receiving votes from the coaches. He was a WCHA All-Rookie Team selection last season after he appeared in 41 games in his rookie campaign, finishing fifth in the WCHA in power-play points (14) and seventh in WCHA freshmen scoring (6G-14A=20). He also received the Norbert Matovich Memorial Award as the team’s top freshman.

Award criteria include candidates emulating the exceptional character traits exhibited by the award’s namesake, Hobey Baker. A legendary American hero, Baker was a World War I fighter pilot and was known as America’s greatest amateur athlete in his day, excelling at hockey and football at Princeton. Award candidates must demonstrate strength of character both on and off the ice, contribute to the integrity of his team and display outstanding skills in all phases of the game. Consideration should be given to scholastic achievement and sportsmanship.

Mitch is a management student in the School of Business and Economics.