Green Chemistry: An Overview of Principles and Applications

Professor, Department of Chemistry and Biochemistry and
Director,  School of Green Chemistry and Engineering
The University of Toledo
Thursday, November 6, 2014
11:00 am Chemical Sciences Building Room 102

Over the past two decades, there has been a dramatic shift in the way government and industry view pollution prevention and the environmental consequences of chemical manufacture in the United States. Source reduction, rather than “end of the pipe” waste treatment, is now the preferred method for reducing pollution. This approach requires chemists and engineers to be increasingly aware of the environmental consequences of the chemical-related products and processes we develop. Green chemistry, “the design of chemical products and processes that reduce or eliminate the use and generation of hazardous substances,” is the foundation of this increased awareness. This presentation will provide an overview of selected green chemistry principles, green chemistry applications and metrics, chemical alternatives assessment, and future opportunities.

The fall 2014 meeting of the American Chemical Society—Upper Peninsula Local Section will be held Friday October 24, 2014 at 4 p.m. in Chem Sci 101.

Sarah Green (Chem) will be the featured presenter. Green recently returned from a yearlong experience in Washington (DC) where she served as the Jefferson Science Fellow. Refreshments will be provided.

DNA as a Catalyst

Department of Chemistry, University of Illinois at Urbana-Champaign

DNA in its double-stranded form is familiar as the genetic material. When single-stranded, however, DNA can adopt complex three-dimensional structures that allow binding of substrates and catalysis of chemical reactions. DNA has many conceptual and practical advantages over other biologically derived polymers (proteins and RNA) for applications as a catalyst.  This presentation describes the development of DNA catalysts, or deoxyribozymes, for a variety of chemical reactions, primarily involving covalent modification of peptide and protein substrates.

John A. Jaszczak
Department of Physics and the A. E. Seaman Mineral Museum Michigan Technological University

The Lelatema Mountains in northern Tanzania are host to one of the world’s richest flake graphite deposits, but it is the purple-blue gem variety of zoisite called “tanzanite” that has brought renown to the region since the 1960s.

In December 2007 a pocket of exceptionally fine crystals of graphite was discovered at in Merelani’s Block D. Given graphite’s extreme softness and obvious lack of gem value, it seems almost in miraculous that specimens of these graphite crystals, perhaps the finest in the world, were superbly preserved. Adding to their uniqueness and beauty, the graphite crystals are covered by a secondary overgrowth of graphite that contains rare stellate graphite dendrites. The pocket also produced superb gem-quality crystals of diopside, fluorapatite, and tremolite crystals. More recently, world-class specimens of several sulfide minerals have been discovered and preserved. These include highly lustrous, large Pyrite crystals, exceptionally large, translucent crystals of the rare ZnS polytype wurtzite, and rare black octahedral crystals of alabandite. This illustrated lecture will briefly tour this amazing mining district, review these seemingly miraculous mineralogical that have been uncovered.

The antitumor activity of kiteplatin was reported for the first time twenty years ago. Recently, kiteplatin was investigated as potential antitumor drugs for the treatment of cisplatin- and oxaliplatin-resistant tumors.

Resistance to Pt-based antitumor drugs can involve different processes, such as the binding of S-donor biomolecules, like glutathione, cysteine and methionine, to the Pt metal center. This interaction prevents Pt drugs to react with DNA, i.e. the event triggering the antitumor effect. Kiteplatin showed an unique reactivity with these S-donors biomolecules and, for the first time, it was found that, also after reaction with glutathione, kiteplatin is still able to react with a DNA model. This unique behaviour could explain the activity of kiteplatin in cisplatin- and oxaliplatin-resistant tumors.

Dow Corporate Venturing (DCV) serves to identify new technologies for Dow, to analyze and quantify new market opportunities enabled by these breakthroughs, and to capture their value by commercializing or participating in them. DCV serves as an innovation pipeline for Dow, supplying a continuous flow of new business options for the company. The Technology Scouting group within DCV seeks to identify and interact with emerging technology-based companies, and to connect directly with the sources of these innovations, with a focus on developing strategic relationships. Dow Technology Scouting group has established region-specific networks, enabling a global approach to innovation sourcing that meshes with the development and innovation targets of the Corporation, and encourages a Company-wide scouting mentality. Technology Scouting is Dow’s front line for identification and assessment of new opportunities and our Technology Scouts provide a conduit for innovation from the external marketplace of technology into Dow. Examples of recently analyzed, external, technology-based companies will be discussed.

Atmospheric aerosol affects the Earth’s energy budget, reduces visibility and influences human health. The organic composition of aerosol is quite complex and continuously evolves through various atmospheric processes. To gain a deeper understanding of the molecular composition of atmospheric organic matter (AOM), chamber-generated biogenic secondary organic aerosol (SOA), ambient aerosol and cloud water samples were studied. Ultrahigh resolution Fourier Transform Ion Cyclotron Resonance Mass Spectrometry was used to provide detailed molecular characterization of the atmospheric samples. Due to the extremely high mass resolution and mass accuracy, thousands of individual molecular formulas were identified in all of the samples studied. Multivariate statistical analysis methods were evaluated to compare the similarities and differences of the sample compositions. The molecular characterization of biogenic SOA, ambient aerosol and clouds will be discussed. This study of the three types of atmospheric samples helps to understand the composition of AOM with respect to atmospheric processes.

Dr. Pat Heiden’s student, Ning Chen, presented at the 42nd Central ACS Regional Meeting in Indianapolis IN in June 2011 as well as at the 243rd American Chemical Society (ACS) National Meeting in Anaheim CA in March 2011. Here are some photos of Ning with his poster: 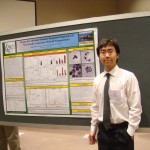 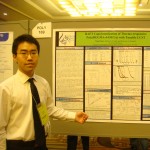 ACS meetings are an excellent opportunity for students! Reach 12,000 chemical professionals at each 2012 national meeting or at other events throughout the year, including regional meetings.

Dr. Lynn Mazzoleni, an assistant professor of chemistry, is currently at the top of Mt. Pico, an extinct volcano in the Azores. She’s working on understanding aerosols’ chemistry and how they interact with sunlight.

Dr. Mazzoleni checked with us recently and shared a photo she took from the ferry as she arrived on day one.  On that particular day the mountain was mostly free of clouds:

Learn more about Dr. Mazzoleni and her research. 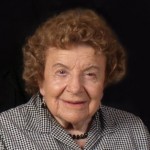 Lina Tormen Taskovich ’52 studied chemistry and chemical engineering at Michigan Tech almost thirty years before Sally Heidtke, and she has some words of wisdom for women students too: “Study a field you like—you have to spend all your life working in it. And go for the top degree in the field of your choice. Also, do not go for the most lucrative job, but for the job you would love to do.”

When Taskovich came to Michigan Tech, the male-to-female student ratio was about 50-to-1. Only a dozen or so women were in science and engineering. She majored in chemistry, and in her freshman class, there were eight women. Her sophomore year, there were four. During her third and fourth years, Taskovich was the only one.